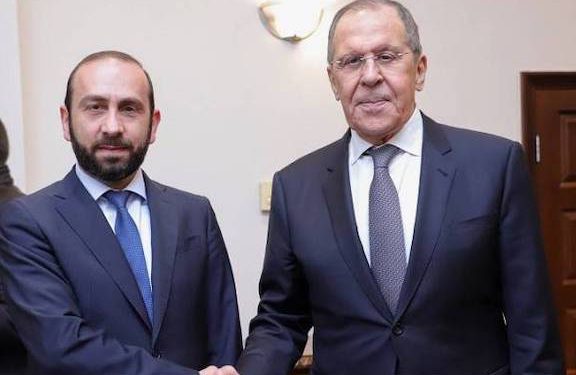 The foreign ministers of Armenia and Russia, Ararat Mirzoyan (left) and Sergei Lavrov meet in Antalya, Turkey on March 10

The foreign ministers of Armenia and Russia, Ararat Mirzoyan and Sergei Lavrov, discussed furthering cooperation between to countries, especially within bodies and collective organizations of which the two countries are members.

The two top diplomats met on the sidelines of the Diplomacy Forum, which kicked off in Antalya, Turkey on Thursday.

The focus of the cooperation talks were the Collective Security Treaty Organization—CSTO—the Eurasian Economy Union and the Commonwealth of Independent States, all of which are Russia-led groupings focused on various economic, security and geo-political facets.

The Karabakh conflict and the imperative for a lasting settlement via the OSCE Minsk Group co-chairs was also on the agenda, as was the implementation of statements signed by the leaders of Armenia, Azerbaijan and Russia on November 9, 2020, January 11 and November 26, 2021.

The issue of normalizing relations between Armenia and Turkey was also discussed.

Mirzoyan’s presence at the Antalyan summit is a direct result of the normalization process. After weeks of voicing uncertainty about Yerevan’s participation at the forum, which is being led by Turkey’s foreign minister, Mevlut Cavusoglu, Armenia’s foreign ministry announced this week that Mirzoyan would travel to Turkey and take part in the event.