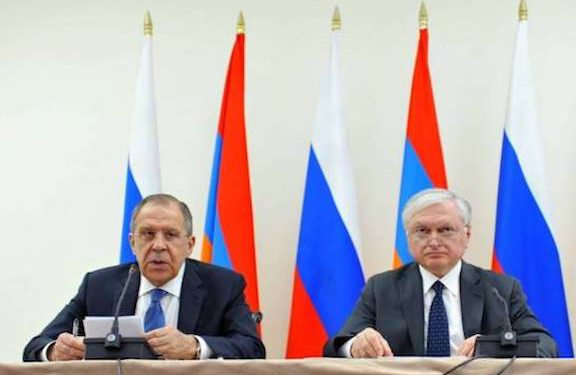 Russia’s Foreign Minister Sergei Lavrov on Friday added his support for normalization of ties between Armenia and Turkey.

This topic has gained traction this week after Prime Minister Nikol Pashinyan called remarks made by Turkey’s President Recep Tayyip Erdogan “positive signals.” Of course, it did not take long for Erdogan to bluntly set preconditions, demanding that Armenia recognize Azerbaijan’s territorial integrity, essentially asking Armenia to turn its back on Artsakh.

“Now that the war is over in Nagorno-Karabakh, there are basis for a political process—unblocking of transport and economic ties—and it would be reasonable for Armenia and Turkey to restart efforts in the direction of normalizing relations,” said Lavrov who added that Russia is ready to actively support such a process.

On Thursday, Russian Foreign Ministry spokesperson Maria Zakharova said Moscow is ready to further promote the improvement of relations between Ankara and Yerevan, and has seen positive signals from the two countries.

Zakharova said that the establishment of relations between the two countries would contribute to the establishment of peace, stability and prosperity in the region, especially against the background of “the normalization of Azerbaijani-Armenian relations in the context of the implementation of the statements signed by the leaders of Russia, Azerbaijan and Armenia on November 9, 2020 and January 11, 2021.”

Lavrov was speaking to participants of an education marathon on Friday when he voiced his support for renewed efforts to normalize ties between Yerevan and Ankara. During his talk, he was asked to reflect on the 2009 signing of the Turkey-Armenia Protocols in Zurich, specifically a note he passed to Armenia’s then foreign minister Eduard Nalbandian, in which he urged Armenia’s top diplomat to “agree to the ceremony without statements.”

“In 2008 our Armenian friends told us that the Turks were proposing to agree to the documents for restoring diplomatic ties, normalizing relations, cooperation and joint projects. We said that’s very good and asked whether there were any preconditions,” said Lavrov recalling what became a tense several hours back in 2009 ahead of the signing ceremony. Lavrov said that Nalbandian, at the time assured him that there were no preconditions set by Ankara.

The protocols signing ceremony took place in Zurich on October 9, 2009. In addition to Lavrov and Nalbandian, Turkey’s then foreign minister Ahmet Davutoglu and then Secretary of State Hillary Clinton attended the ceremony, along with EU and Swiss representatives.

“We were to witness this important event, but before the signing our Turkish colleagues said ‘yes, we will sign it all, but we have to express our reservation over the Nagorno Karabakh issue.’ The text of the reservation contradicted Armenia’s position. And I said to my colleague that I had warned him that I didn’t believe that it would all take place without preconditions,” explained Lavrov, who recalled that the process was at a deadlock.

“We were sitting there watching football while the two ministers were arguing until late hours of the night. We understood that we have to somehow get out of that situation, and I wrote a note to him [Nalbandian] asking him not to insist on the topic of commentary [statement]. And that’s how it happened,” recounted Lavrov, saying the documents did not come to fruition because of the differences in position about Karabakh.