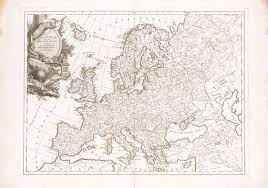 The Library of Congress has recently digitized two Armenian-language maps of Africa and Europe from the 18th century, completing the four-map set of the world that also includes Asia and America.

The maps reflect the knowledge of the period’s European cartographers and the ways in which they conveyed it (including pictorial representation of points of interest).

Prepared by Elia Endasian at the San Lazzaro degli Armeni Monastery in Venice, Italy, the maps offer a glimpse into the vast cultural contribution of this Armenian Catholic congregation.

Founded in 1700 by Abbot Mkhitar of Sebastia (Sivas in Turkey), the monastic order was a beacon of knowledge and education. The impact of the Mkhitarist fathers on the Armenian language, literature, history, philosophy, and geography cannot be overstated.

The Library of Congress houses a wealth of material published by the Mkhitarists. They include these four maps by Endasian, produced in 1786 and 1787, which are in the custody of the Geography & Map Division, the largest map repository in the world.