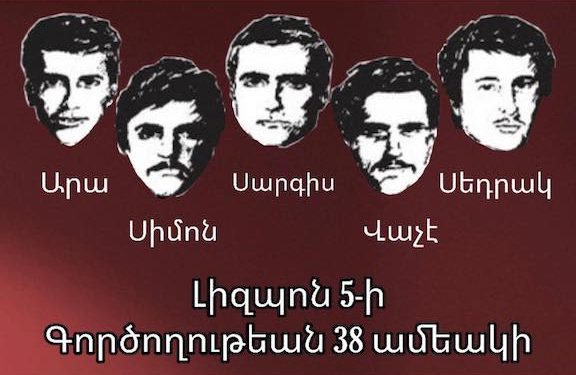 The Lisbon 5 anniversary was commemorated on Sunday

The 38th anniversary of the Lisbon-5 was commemorated during an event Sunday at the Krikor and Mariam Karamanoukian Glendale Youth Center organized by the local Armenian Revolutionary Federation Aharonian chapter.

The event followed a special requiem Mass at St. Mary’s Armenian Church, which joined all Prelacy-affiliated churches in remembering Vatche Daghlian, Sarkis Aprahamian, Ara Kerdjelia, Setrak Adjemian and Simon Yahneian whose names have been seared in our national psyche and consciousness and they became symbols of a national liberation struggle.

Balabek Barsamyan introduced a video presentation, produced by the newly-inaugurated Aharonian Media Studios, chronicling the Lisbon-5 story and the legacy their sacrifice has left for the Armenian Nation.

The keynote speaker, Vicken Harboyan, discussed the need to take lessons from the unwavering commitment of the Lisbon-5 and work toward confronting the national challenges facing our homeland today.

On July 27, Setrak Adjemian, Sarkis Aprahamian, Vatche Daghlian, Ara Kerdjelian and Simon Yahneian, headed to Lisbon where they would sacrifice their lives at the altar of justice and in the name of the Armenian Cause, forever becoming immortalized and memorialized as modern-day heroes of the Armenian Liberation struggle.