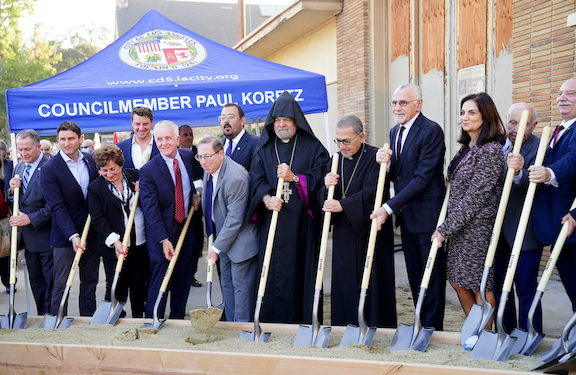 An almost a decade-long effort by community activists, local officials and other stakeholders came to fruition on December 4 at a groundbreaking ceremony on the site of the long-awaited Armenian community center in the West San Fernando Valley.

In 2013, as a result of hard work and commitment to the Armenian community, Los Angeles City Councilmember Paul Koretz, along with his colleagues, the current L.A. Mayor Eric Garcetti and Councilmember Paul Krekorian were able to pass a motion granting the old firehouse on 5001 Balboa Boulevard to the Armenian Cultural Foundation for a 30-year lease to build an Armenian community center on the 5,000 square-foot property.

What was aptly called a “saga” by one official on Saturday, that spanned almost a decade, became a reality on December 2, when the lease agreement was finally signed by L.A. city officials and the West San Fernando Valley chapter of the Armenian Cultural Foundation.

Many of those involved and engaged in the process were on hand Saturday for an official groundbreaking event—a celebration—for the Armenian center, which will bring much-needed space for the Armenian community and the neighborhood to congregate.

Mayor Garcetti, who while serving on the L.A. City Council fought for the process, was joined by councilmembers Koretz and Krekorian to welcome and celebrate the results of their hard work on behalf of the Armenian community. Also attending the event and speaking were Assemblymember Jesse Gabriel, L.A. County Assessor Jeff Prang and Tony Royster, the General Manager of the Los Angeles Department of General Services. Also attending the event was California State Senator Henry Stern.

Representing Congressman Brad Sherman was his district director, Scott Abrams, who presented an American flag flown above the U.S. Capitol as token from Sherman. In accepting the gift, ACF San Fernando Valley chapter president Garo Kamarian pledged that the flag will fly over the center, as soon as the flag poll are installed on the property.

The event began with a flag ceremony led by the Homenetmen marching band and the San Fernando Valley Massis Chapter scouts.

Welcoming the initiative and congratulating the San Fernando Valley community was Armenian Revolutionary Federation Western U.S. Central Committee chair Dr. Carmen Ohanian, who, in her remarks, thanked the vision held by the city officials for making the center a reality.

Speaking on behalf of the ACF was the organization’s chairman Avedik Izmirlian, who underscored that the mission of the ACF has been to support the opening and operation of Armenian centers around the community, with the aim of serving the future generations of Armenians.

Kamarian, the West San Fernando Valley ACF chair, also emphasized the important role the center will play in educating and advancing the youth of the community. He especially thanked all the staff members at various city departments and council offices who worked tirelessly on making the center a reality.

The event culminated in the elected officials, the clergy, leaders and representatives of organizations all coming together and picking up their shovels to break ground on the new center.

The event was captured by the entire Los Angeles broadcast press corps and was livestreamed on Asbarez’s Facebook page.

Following the ceremony, the attendees were invited to a reception at the Ferrahian school grounds, where community member George Kalpjian made a $5,000 donation toward the renovation effort.