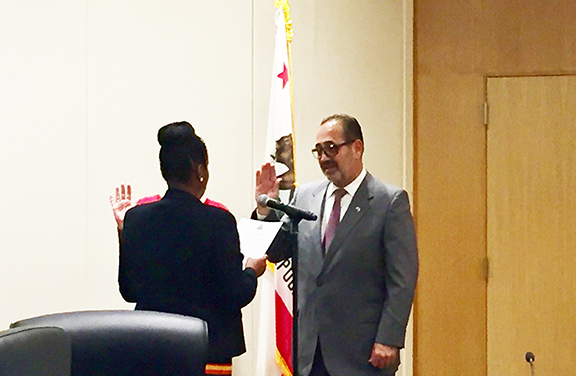 Marty Simonoff takes his oath of office
BREA, Calif.—On  Tuesday, December 20, Armenian-American Marty Simonoff was sworn in for an unprecedented 6th consecutive term on the Brea City Council, He was first elected in November 1996 and every four years thereafter. He has served as Mayor four times, in 1999, 2002, 2007 and 2015.
The Armenian American community of Orange County attended the ceremony during which Council Member Simonoff recognized Father Moushegh Tashjian from St. Mary Armenian Church and Father Karekin Bedourian from Forty Martyrs Armenian Church. Former California State Assemblywoman Young Kim and representatives from the OC Board of Supervisors were also in attendance along with AGM Armenian School Principal Sanan Shirinian, representatives from the two Armenian churches in OC, the Armenian Community Center, AYF, AGBU Saturday School, and many members of the Armenian National Committee of Orange County (ANCA OC) which has a close working relationship with their friend, Marty.


Last year Simonoff attended the Armenian Genocide Monument unveiling at St. Mary Armenian Church and later that day spoke at the community wide Genocide Centennial commemoration in Orange County. Earlier this year he was very helpful with the Orange County Board of Supervisor’s adoption of a standing resolution commemorating the Armenian Genocide and spoke during the ceremonies.
His grandfathers immigrated to the United Stated in the 1910s while his both his grandmothers arrived in the early 1920s, on the same ship out of Constantinople. His paternal grandparents originally settled in Youngstown, Ohio, prior to moving to California, and his mother’s side settled in Los Angeles. Marty has been happily married to Sonie for over 39 years, they have two children and two grandchildren.
Council Member Simonoff holds a Bachelor of Arts degree in political science from Whittier College and his professional experience includes a career in law enforcement. He retired in 1991 as a police captain with the City of Huntington Park.

He maintains a strong interest in all aspects of public safety and is beginning his 20th year as a member of the National League of Cities’ and the State league of California Cities’ Public Safety and Crime Prevention Policy and Steering Committees. He is also a past member of the League of California Cities Board of Directors, and past president of the Orange County Division of the League of California Cities.
Council Member Simonoff has an extensive background in community service, often times volunteering for non-profits. He is a member of the Brea Lions Club and a past Committee Chair for the Brea Chamber of Commerce, and has been instrumental in working with Seniors at the Senior Center securing donations to support many of their programs. He has also been active in youth sports, serving as a Brea Little League Coach and past Board Member for the Brea Olinda High School Football Booster Club. He even regularly volunteered at Saint Angela Merici Parish cooking for the needy and homeless.
Tara Campbell Sworn In and Begins Serving on the Yorba Linda City Council

On Tuesday, December 20, Tara Campbell took her oath to serve on the Yorba Linda City Council. Previously a member of the Yorba Linda Planning Commission, She has been active in the community for some time. Councilwoman Campbell is very close to the Armenian American community and endorsed by ANCA OC, who attended her swearing in ceremony and personally congratulated her.