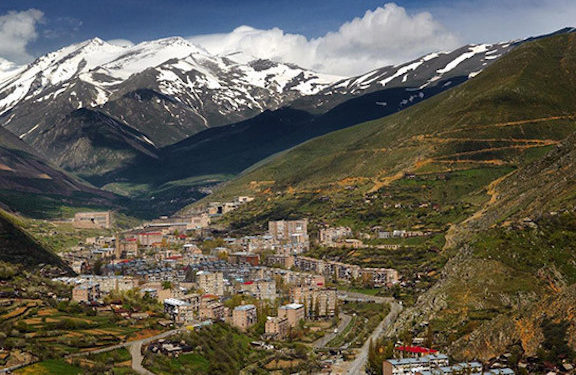 An aerial shot of Kapan where the Mount Pela is located

There were conflicting reports on Monday about whether a strategic hill, known as Mount Pela in Armenia’s Syunik Province, has fallen under Azerbaijani control.

While the mayor of Kapan, Gevorg Parsyan, told the press that for two days the area has been under Azerbaijani control, Armenia’s National Security Service issued a statement on Monday denying the claims.

“In response to some media reports claiming that Kapan’s Mount Pela has been surrendered to Azerbaijan, the National Security Service of Armenia is reporting that no positional changes have taken place in the area called Mount Pela in the Syunik Province and the Armenian Border Guards continue conducting border protection in the mentioned part,” the National Security Service said in its statement.

“The road served as an intermediate road for us, it also served for the villagers to procure firewood, it is now closed by the Azerbaijanis, it is under their control,” added Parsyan, who explained that two days ago the part of the hill was under the control of Armenian border patrol units, while the other part was being controlled by Azerbaijani forces, which breached Armenia’s sovereign border in May and have established positions in not only Syunik but also the Gegharkunik provinces.

Parsayan explained that Mount Pela in a strategic hill. The control of the area by the Azerbaijanis poses dangers to the neighboring villages, first and foremost to the Agarak village.

The Kapan mayor claimed that an agreement to surrender the area to Azerbaijan was reached last winter, with its coordinates determined based on electronic GPS tracking.

“In January-February, there was an agreement. Measurements were made by GPS, as a result of which some parts were Armenian, some parts were Azerbaijani. We could use the Armenian parts as an intermediate road, the villagers used it to enter the forest. Now that part, I do not know why, has come under their complete control,” Parsyan said.

The Kapan Mayor said that the Azerbaijani police checkpoint on the Goris-Kapan highway also poses a serious risk for residents of his city. Since Azerbaijani forces blockaded the road last month, traffic has significantly decreased, said Parsyan, who encouraged the use of the road, explaining that if it is not thoroughly used it could be easily claimed by Azerbaijan.