Memories from My School Years in Tehran 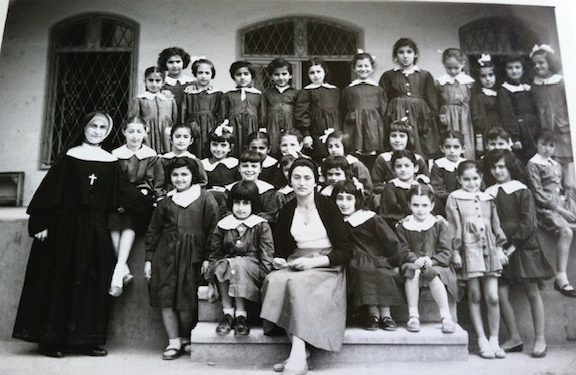 Catherine Yesayan's 2nd Grade Class at Institute Mariam in Tehran. Pictured are 32 students, the Mother Superior, and a teacher. Of the 32 students, 12 are Armenian.

Let’s take a walk down memory lane. I remember I was around six years old, when, one day, my father came home and told my mom that he had enrolled me at a Catholic school, which was run by Armenian nuns. The name of the school was “Institute Mariam.” The news made me so happy that I started to jump for joy on my bed, something that I was not allowed to do. Let me be clear. I’m not sure why I was so delighted.

Contrary to my happy mood, the news made my mom very upset and sad. First, Dad had signed me up at the Catholic school without her consent. Additionally, my mom wanted me to go to the Armenian school where her dad, my grandfather, had been the principal for many years. My grandfather was a respected and well-known member of the Armenian community. However, he had died a year before as a result of a mosquito bite, while vacationing at a nearby village. My mom was still mourning his death and could not bear the idea that her own child would not attend the Armenian school that was so close to her heart.

So, to my delight, I ended up at the Catholic school, where I was immersed in Catholic doctrines, as well as French culture and language. Many years later, my mom confessed that, although at the beginning it was unbearable for her to accept that I wouldn’t go to the Armenian school she had chosen, at the end she was happy that I had the opportunity to learn the French language at a young age.

I still have a photo of my second-grade class. In the photo, there are 32 girls, the Mother Superior, and our teacher. Although I can recall the names of most of the girls, I have only kept in touch with one classmate, Armenineh. She now lives in Evian, France with her family. I’m so fortunate to have been able to visit her many times. She’s the same sweet girl that I remember. We have a saying which means people don’t change. Here’s the translation: “You can tell the personality of anyone from the stool of his or her diaper.”

Since I brought you to this corner of my life, I’d like to share with you a memory that stands out in my mind. I started school by learning three languages: French, Farsi, and Armenian. In those days the load of homework was huge. Every day, when I got home, my mother would sit next to me and help me finish my assignments. That’s how I became the best student in my classroom. At the end of the year, the Mother Superior came to our classroom and gave me a breast-pin (a brooch) in the shape of a graduation cap as an award for being an exemplary student. Many, many years later, here, in Los Angeles, I met Jannette, an old classmate. She was one of the Jewish girls in our class. She told me that she still remembers the day that Mother Superior came to our classroom and gave me that pin.

I left that parochial school at the end of the 6th grade, because a belligerent incident happened and left me with a sour taste in my mouth, and because I had few girlfriends who were attending an Armenian all girls high school – “Mariamian” high school. The French language stayed with me for the rest of my life. At a later column I will write about that episode.

I started the seventh grade at the Armenian all girls high school with a little bump. Here’s the story. The school had four seventh grade classrooms. I was signed up at the #2. However, most of the girls I knew were at the #1 classroom. So, to be with my girlfriends, I asked my mom to change my classroom to the #1. I guess, at that time, the memory of my grandfather was still alive in the minds of the school administration, because the office made a special concession for me to be transferred to the #1 classroom.

I remember, that day, I was sitting behind my desk, when a staff from the office entered the classroom and the teacher asked me to gather my books and follow her. Mrs. Ojik, who was a member of the office staff, took me to the #1 — 7th grade. When I entered the room, I saw three  girls with tears in their eyes, holding their books over their chests, standing by the door. The girls left and the teacher asked me to sit down behind a desk.

Now, there’s more to it. At the time, I had no idea about what had happened. Here’s the back story. The number #1 — 7th grade had too many students. Since they were adding me to that classroom, they had to remove a few students. One of the girls that the teacher had asked them to leave was Lilly (not her real name). She was one of the popular students. She had a bubbly personality. Lilly, alongside of some of her friends, had gone from kindergarten to the 7th grade, and was always at the top of each grade. So, being separated from her close friends didn’t sit well with her.

Today, Lilly and I are close friends. She has explained how the changing of the classrooms affected her. She says, since she was removed from her close friends, she was heart-broken and refused to go back to that school. She had asked her parents to sign her up at another “non-Armenian” high school. The mess of changing of classrooms lasted a whole week. According to Lilly, every day friends would flock to her home and sit around the room as if a tragedy had happened. At the end, some parents and teachers who put their heads together came up with a solution, and the girls were sent back to their original classroom.

I better explain my feelings. If a similar incident took place today, it would be considered “bullying.” Fortunately, Lilly has recovered from that bitter episode and has not held a grudge against me. Sometimes,  when we get together we reminisce about that incident and we laugh about it. Lilly is the same bubbly girl, fiercely protecting her turf. Other than Lilly, there are six or seven other girls from high school that I still keep in touch with. I stayed in that school until I graduated the 12th grade. I’d like to wrap up this topic with a few more memories.

In high school, my favorite subject was Geometry, taught by Ms. Seda. She was the most popular teacher in our school. Everybody loved her. She was young with a happy disposition. It was she who instilled the love of geometry in me. I had Ms. Seda’s contact information, so I called her to tell her that I’m writing about our high school. With her same happy personality, she welcomed me. When I asked her if she remembers me, she said, “Yes, I remember you. Aren’t you Mr. Mikael Stepanian’s granddaughter?” Her answer put a smile on my face.

At that time in Iran, up to 9th grade, our education was general. However, in order to enter the 10th grade, we had to choose a more specialized direction for our future studies. I chose Mathematics. Lilly chose Biology. Our biology teacher was Ms. Nina. One day, when I was in the 7th grade, Ms. Nina was lecturing about different kinds of insects and ticks. She soon began talking about a lethal tick. To demonstrate how serious that tick was, she mentioned that she knew someone who was bitten by it and had died as a result. That someone was my dear grandpa. Realizing Ms. Nina was talking about my grandpa, tears started rolling down my cheeks. Little by little my silent weeping turned into a loud crying, which astounded the class, especially Ms. Nina, who had become very embarrassed about the whole situation.

Here, in a nutshell, I tried to give you some memories of my schooling.