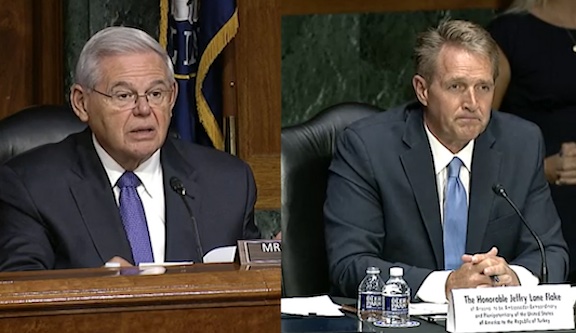 “Senator Flake, for many decades the Armenian Genocide has been denied by the descendants of those who perpetrated it.  In 2019, the Senate recognized the Armenian Genocide for the first time. In April of this year, on Armenian Remembrance Day, President Biden joined us in acknowledging this truth,” stated Sen. Menendez.  “In the past, you’ve voted against resolutions which recognize the genocide. Will you join this body and administration in reaffirming the Armenian Genocide?” Former Senator Flake offered a one-word answer — “Yes.”

Menendez followed up, “If you are confirmed, will you reiterate that commitment on April 24th which is Armenian Genocide Remembrance Day?”  Former Senator Flake responded, “I will.”

While U.S. Ambassador to Turkey nominee Flake did not reference the Armenian Genocide in his prepared testimony, he did note “if confirmed, I will encourage Turkey to support efforts to find a sustainable long-term solution to the conflict between Armenia and Azerbaijan…” More broadly, while citing “very real challenges in U.S.-Turkish relations,” former Senator Flake described Turkey as an “indispensable Ally, anchored in NATO and acting as both a bridge and a buffer to a region in constant flux. Our national interest is served when the United States and Turkey work together to confront the very real threats to global peace and security that emanate from Russia, Iran, and elsewhere in the wider region.”

“Today’s hearing only adds to our concerns – rooted in his four consecutive Congressional votes against Armenian Genocide recognition – regarding Senator Flake’s suitability to serve as our ambassador to Turkey” said ANCA Executive Director Aram Hamparian. “Today, more than ever, we need an ambassador who will confidently assert U.S. interests, courageously stands up for our American values, and, as needed, directly confront the increasingly hostile and openly anti-American Erdogan government.”

Throughout the hearing, Senators made multiple references to the Armenian Genocide and, more broadly, Turkey’s aggression against Armenia.  “You’re going to have a difficult balancing act,” said Sen. Chris Coons (D-DE). “There’s a lot of issues on which to hold Turkey accountable, from Cyprus to repression of religious minorities, to the ongoing tense relations with Greece, to Armenian Genocide recognition – there’s lots of other things in addition to the S-400 and their human rights violations.”

“President Erdogan has taken Turkey way off track, and in the wrong direction – both with respect to NATO commitments overall as well as other malign actions in the region, and undermining human rights at home,” stated Sen. Chris Van Hollen (D-MD). “We also have seen him aiding and abetting the attacks against Armenia,” continued Sen. Van Hollen.

Following the Senate Foreign Relations Committee confirmation hearing, Turkey’s Foreign Ministry tweeted the diplomatic definition of “Agreman” (Agreement), in a veiled threat that Ankara may reject U.S. Ambassador-designate Flake, based on his testimony, which included his commitment to follow President Biden’s policy and properly characterize the Armenian Genocide.

The ANCA called out the Foreign Ministry’s “bluff, blunder, or both” in a tweet on Tuesday.

BLUFF, BLUNDER or BOTH?