Mirzoyan and Blinken Meet in Washington 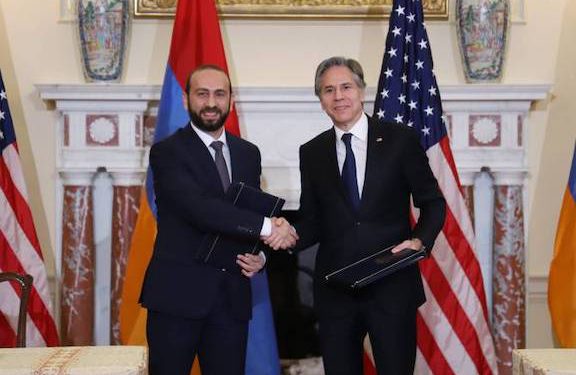 Armenia’s Foreign Minister Ararat Mirzoyan met with Secretary of State Antony Blinken on Monday in Washington, where the two also signed a memorandum of understanding regarding strategic civil nuclear cooperation.

State Department spokesperson Ned Price said in a statement that the purpose of the meeting was to launched what has been termed the “U.S.-Armenia Strategic Dialogue.”

Mirzoyan arrived in Washington on Monday on a working visit. In addition to Blinken, Mirzoyan has also met with director of U.S. Agency for International Development Samantha Power.

Price said the memorandum of understanding with pave the way “for increased cooperation on civil nuclear matters as Armenia looks to diversify its energy supply.”

“The Secretary and Foreign Minister discussed Armenia’s progress in implementing democratic, rule of law, and anti-corruption reforms,” said Price’s readout of the meeting. “They also discussed the ongoing dialogue between Armenia and its neighbors.”

“Secretary Blinken thanked the Foreign Minister for the flexibility Armenia has shown and encouraged further direct talks between Armenia and Azerbaijan, underscoring the U.S commitment to help Armenia and Azerbaijan find sustainable peace and prosperity, including in our capacity as an OSCE Minsk Group Co-Chair,” said Price in his statement.

“The United States and Armenia maintain long-standing cooperation across the breadth of our relationship, including in the fields of security, energy, commerce, and nonproliferation.  Deepening our cooperation in civil nuclear energy, science, and technology will strengthen our strategic bilateral relationship, and have wide-ranging, positive impacts on how we work together,” said Blinken after signing the memorandum of understanding.

Nuclear Cooperation MOUs are diplomatic mechanisms that strengthen and expand strategic ties between the United States and a partner country by providing a framework for cooperation and a mutually aligned approach to nonproliferation on civil nuclear issues and for engagement between experts from government, industry, national laboratories, and academic institutions, the State Department explained.

Blinken welcomed the relaunch of the Strategic Dialogue between Armenia and the U.S., which was suspended due to the pandemic.

“This is a very important vehicle by which we can continue to deepen and strengthen our relationship to pursue new areas of cooperation and collaboration, and we’re very pleased to be able to do that now,” Blinken said in welcoming Mirzoyan.

“I just want to take this opportunity as we’re sitting here to, in the first instance, praise the leadership of the prime minister and his government, the democratic reforms that they’ve been pursuing, the progress that continues to be made – but also to very much welcome the dialogue between Armenia and Azerbaijan, and to express real appreciation for the vision and the courage and the flexibility that the prime minister and Armenia have been showing in this process working toward what we all want, which is a lasting peace,” added Blinken.

In his remarks, Mirzoyan said that Armenia appreciates the “United States support for developing Armenia’s energy sector, and I was talking about – I was speaking also about exploring new areas, and here it will be honor for me to sign with you the Memorandum of Understanding on our civil nuclear cooperation.”

“And I also want to note that we value our partnership aimed at peace and stability in our region, and in this regard I want to highlight the important role the United States of America play as a co-chair of the OSCE Minsk Group, which has a mandate from the international community to facilitate a peaceful resolution of the Nagorno-Karabakh conflict.  I also appreciate United States support through the Armenia-Turkish normalization process and United States strong stance on the recognition on the condemnation of the Armenian genocide and confirmation of this stance this year, too,” added Mirzoyan, according to a State Department readout of the meeting.

Earlier on Monday, Mirzoyan had an opportunity to discuss opportunities for implement new joint programs with the U.S. during his meeting with Power, the USAID director.

Mirzoyan emphasized USAID’s support in the Armenian government’s the reform initiatives in a number of sectors, particularly in the fight against corruption, judiciary and patrol police.

“Reference was also made to the innovative, sustainable development programs implemented by USAID in Armenia within the framework of Armenia-US cooperation aimed at promoting democratic development, economic growth, and strengthening energy security, as well as implementing reforms in the social spheres in the country,” said a statement from Armenia’s Foreign Ministry.

During the meeting, Mirzoyan also briefed Power about the humanitarian issues that have arisen from the 44-day war. In this context, the need for the repatriation of Armenian prisoners of war and civilians held by Azerbaijan was especially emphasized.