Mirzoyan Hints at Another Meeting With Azerbaijan’s Foreign Minister 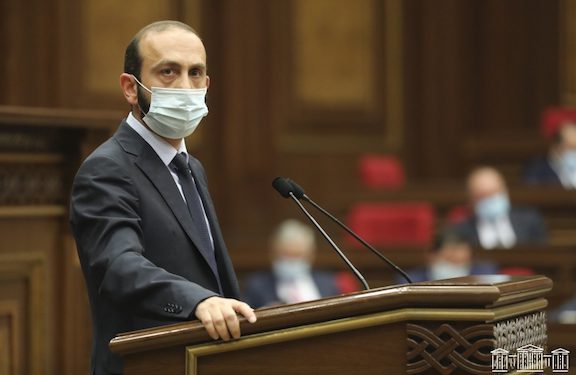 The foreign ministers of Armenia and Azerbaijan have agreed to meet again under the auspices of the OSCE Minsk Group Co-Chairs to discuss a number of humanitarian issues, including the return of Armenian captives who are illegally held in Azerbaijan, Armenia’s Foreign Minister Ararat Mirzoyan said Thursday during a presentation in Parliament.

“Of course, the resumption of these discussions and the negotiation process are welcome and definitely serve the interests of Armenia and Nagorno Karabakh,” Mirzoyan told lawmakers.

“We, once again, state that the [Karabakh] issue is not solved. Azerbaijan likes to say that the conflict no longer exists, but I believe that this is one more assurance by the international community that, in fact, the conflict not only exists, but required a settlement,” added Mirzoyan. “Finding a solution must take place with the mediation of the OSCE Minsk Group Co-Chairmanship—the body that has the only internationally recognized mandate.”

Mirzoyan found it a positive signal, that despite tensions and many unresolved issued, Baku was willing to meet in the first place and discuss humanitarian issues resulting from the 44-Day War.

“Of course, the discussion will, first and foremost, relate to the prisoners of war and civilians who are being held illegally by Azerbaijan,” Mirzoyan told lawmakers, adding that such a discussion would include confirming the number of existing captives, as well as providing access to international humanitarian organizations to conduct missions to Karabakh.

“I believe a positive outcome to these issues would, first and foremost, signal a constructive approach by Azerbaijan and would create an environment where we can discuss more important issues in due time,” added Mirzoyan.