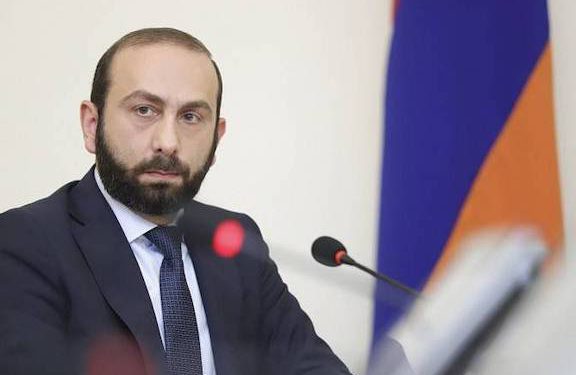 A day after President Ilham Aliyev of Azerbaijan overtly threatened war against Armenia if it continued to oppose a proposed land corridor through Armenia, Foreign Minister Ararat Mirzoyan blasted Aliyev saying that his “destructive” assertions call into question Baku’s commitment to peace in the region.

In remarks made at an international conference in Baku, Aliyev also threatened Armenia, and any international entity, if they continue to insist that the Karabakh conflict has not been settled, claiming that with the 2020 war conflict was settled, hence there is no place called Karabakh.

In an interview with Armenpress on Friday, Mirzoyan responded to Aliyev’s statement and when asked to comment about the Azerbaijani leader’s accusation that Armenia was not being sincere in the peace process, Mirzoyan said that Azerbaijan must take “practical and sincere steps” toward that end.

“It is also obvious that for the success of these efforts, it is necessary to address the entire set of existing problems that have caused the conflict in order to find a solution acceptable to all parties. In this context, the statements made by official Baku that Nagorno-Karabakh conflict has been solved are at least not understood or, moreover, cast doubt on the sincerity of the Azerbaijani authorities’ intention to achieve peace,” Mirzoyan told Armenpress.

‘No matter what statements are made, the Nagorno-Karabakh issue will continue to exist as long as the issues of security, sufficient guarantees for the protection of all rights of the Armenians of Artsakh, and the status of Nagorno-Karabakh arising from them are not addressed. In the modern world, the situation created by the use of force cannot be the solution to a problem,” added Mirzoyan.

“The assertion that as a result of the use of force even Nagorno Karabakh does not exist, does not speak about the constructiveness of Azerbaijan. Needless to say that this, of course, corresponds neither to the de-facto reality, the most important part of which is the existence of Artsakh Armenians in Artsakh and the presence of Russian peacekeeping forces to ensure their security, nor the November 9 trilateral declaration, which stopped the war and clearly defines the existence of Nagorno Karabakh,” explained Mirzoyan.

“The same can be said about the statements of the Azerbaijani authorities on the non-existence of the OSCE Minsk Group Co-Chairs. First of all, no one has suspended it or can suspend the international mandate of the Co-chairs to contribute to the political settlement of the Nagorno Karabakh conflict without the relevant decision of the international institute defining it. In that case, it is incomprehensible that if the parties really want to negotiate sincerely—to find mutually acceptable solutions, to achieve a stable, comprehensive peace—then why should those talks not take place in the OSCE Minsk Group Co-chairs’ format? A format which has the clear support of the international community and not using its experience and potential is simply not logical and reasonable,” said Mirzoyan.

Armenia’s top diplomat reiterated Yerevan’s commitment to fulfilling the provisions of the agreements between Russia, Armenia and Azerbaijan, and said that Armenia has entered the talks in “good faith.”

“The process would advance more smoothy if there are no statements by Azerbaijan about extraterritorial corridors, which have nothing to do with the trilateral declaration of November 9, as well as with the commitments assumed by the [other] statements,” said Mirzoyan.

“As for Azerbaijan’s efforts to draw parallels between the Lachin corridor and the regional transport routes to be unblocked, they obviously cannot have the same status, at least arising from the provisions of the trilateral declaration signed on November 9, 2020, which clearly defines the status of the Lachin corridor,” explained the foreign minister. “Nagorno Karabakh and the Nakhichevan Autonomous Republic have different statuses, different neighborhoods, different security environments. Accordingly, their relations with Armenia and Azerbaijan cannot be identical.”

Mirzoyan said that Azerbaijan is delaying the process of unblocking transport links, adding that Yerevan is for that process through the provisions of the agreements that stress “the sovereignty of the countries and jurisdiction over roads.”

Earlier on Friday, Mirzoyan met with Secretary General of the Council of Europe Marija Pejčinović Burić who is in Yerevan. The two reportedly discussed the settlement of the Nagorno Karabakh conflict, the consequences of the aggression against Artsakh in 2020, and the issues of normalization of relations between Armenia and Azerbaijan.

“I particularly emphasized the fact that by attempting to resolve the Nagorno Karabakh conflict by the use of force in 2020, as well as by invading the sovereign territory of Armenia, Azerbaijan has grossly violated its commitments undertaken when ascending to the Council of Europe, and this must be properly addressed by the Council of Europe and its member-states,” Mirzoyan told the visiting secretary-general.

He said that on the road to establishing peace and stability in the region, “addressing of the Nagorno Karabakh conflict is fundamental, which should include the provisions of ensuring the security and all the rights of the people of Artsakh, and final determination of the status of Nagorno Karabakh.”

“The people of Artsakh have the same rights as everyone and the fact of being in the conflict zone cannot deprive the Armenians of Artsakh of their universal fundamental rights,” added Mirzoyan.

He also discussed the humanitarian issues that have arisen as a result of the 2020 war, specifically the return of Armenian prisoners of war, who are being held captive in Azerbaijan.

“The humanitarian issues resulting from the aggression unleashed against Artsakh—the return of Armenian prisoners of war held in Azerbaijan and the humanitarian access to Artsakk—remain unresolved, the politicization of which is unacceptable,” Mirzoyan told the Council of Europe president.

“The Anti-Armenian and warmongering rhetoric, physical and psychological terror against the civilian population are unacceptable in the same way,” said Mirzoyan.

“We believe that the Council of Europe, its relevant bodies and leaders should be more determined, at least when it comes to the issues of Armenian prisoners of war and the humanitarian access to Artsakh, and put their utmost effort so that the the interim decisions of the European Court of Human Rights, PACE Resolutions and the provisions of the memorandum of the Commissioner for Human Rights issues on November 8, 2021, are being respected,” Mirzoyan added.