Mirzoyan Urges OSCE to Address Rights and Security of Artsakh 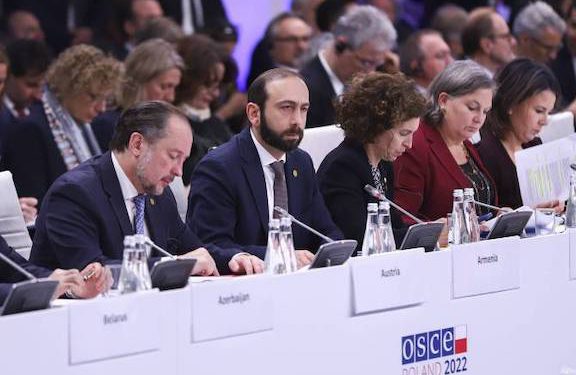 Armenia continues to believe that the OSCE, the OSCE MG Co-Chairing countries, the OSCE mechanisms with their accumulated knowledge and experience can and should contribute to promoting stability and establishing lasting and durable peace in the region, Foreign Minister Ararat Mirzoyan said Thursday during an OSCE Ministerial Meeting being held in the Polish city of Łódź.

Among other topics, Mirzoyan referred to the provocative and aggressive actions carried out by Azerbaijan against the Armenians of Nagorno-Karabakh in March and August of this year.

“In blatant violation of Trilateral Statements, Azerbaijan in fact ethnically cleansed yet another settlement in Nagorno-Karabakh and tried to impede the functioning of the Lachin corridor, which is the lifeline for more than 120,000 people,” Mirzoyan said.

“We believe that the issue of rights and security of the people of Nagorno-Karabakh should also be comprehensively addressed. These issues have always been at the heart of the peace process led by the OSCE Minsk Group Co-Chairs,” he added.

Mirzoyan also discussed the challenges facing the European security infrastructure, with rampant violations of the OSCE mission, including the Helsinki final act.

“Regrettably, the South Caucasus was one of the regions, where we have faced continuous use of force and the threat of use of force. Our neighbor Azerbaijan not only has been continuing its belligerent and warmongering rhetoric, but also its military aggression against the sovereignty and territorial integrity of Armenia,” Mirzoyan emphasized by providing a briefing about Azerbaijan’s September 13 attack on Armenia that included war crimes, coupled with targeting of civilians, execution and torture of Armenian military personnel, including women.

“We would like to express our appreciation to those partners who have not shied away from identifying the true aggressor and have raised their voices on the need to duly prosecute the war crimes and punish the executors,” Mirzoyan said.

“It is equally important to demand the complete withdrawal of the Azerbaijani armed forces from the sovereign territories of Armenia. Their continued presence in internationally recognized territories of Armenia is a serious challenge to fragile peace and stability in our region,” explained Armenia’s foreign minister.

“Under the current circumstances it is difficult to fathom achieving peace in a single part of the OSCE region. However, the government of Armenia has shown political will and has been taking decisive steps to open a new era of peace and stability in the South Caucasus,” said Mirzoyan.

“Despite the frequent provocations by Azerbaijan, we have not stopped our talks on normalization of our relations, unblocking all transport and economic links, delimitation and border security. Let me be clear here: Armenia is ready to proceed with the unblocking of communications once Azerbaijan agrees that all roads should operate with complete respect for our sovereignty, territorial integrity and national legislation,” explained Mirzoyan.

“The delimitation process of our state border should not turn into an exercise of putting forward territorial claims against Armenia and thus should be carried out based on maps that have legal bases. In this regard, the agreements reached in Prague and Sochi this year, particularly the commitment to realize the delimitation based on the UN charter and 1991 Almaty declaration will foster this process,” Mirzoyan added.

“Under current circumstances, when Azerbaijan is covering up its use of force against Armenia by engaging blame games, the international presence on the ground and the clear posturing toward the aggression and the aggressor-state are important more than ever before,” Mirzoyan emphasized.

“We continue to believe that the OSCE, the OSCE MG Co-Chairing countries, the OSCE mechanisms with their accumulated knowledge and experience can and should contribute to promoting stability and establishing lasting and durable peace in our region,” Mirzoyan said at the conclusion of his remarks.