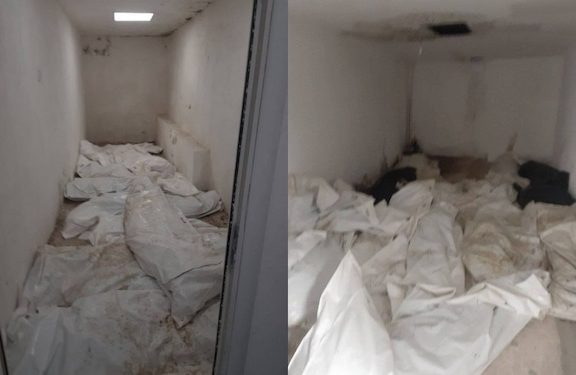 Public outrage escalated over the authorities’ treatment of the remains of soldiers who perished during the Artsakh war resulting in the firing of the director and two other employees of a morgue in Abovian on Wednesday, after photos circulating on social media revealed bags full of remains strewn in a basement.

Since military actions in Karabakh ended in November, hundreds of relatives of soldiers have been demanding the return of the remains of their loved ones.

According to the authorities, 200 corpses and 400 body parts of dead soldiers are currently kept at the Abovian morgue, where authorities are tasked with identifying the deceased through DNA samples provided by families. Officials say that DNA samples taken from them match those of nearly 100 families of the missing soldiers, reported Azatutyun.am.

The delay in the government’s response has frustrated the families of the deceased soldiers, some of whom have refused to claim the bodies identified because they say they did not trust the forensic results.

On Monday, angry relatives of soldiers took matters into their own hands and forced their way into the various morgues to inventory the remains. At the Abovian morgue, the relatives found plastic bags filled with human remains dumped in a basement that was not refrigerated. Those photos soon began circulating on social media causing an uproar.

At first, Armenia’s Health Ministry denied that the remains had been kept in degrading conditions. Later, Acting Health Minister Anahit Avanesyan issued a public apology to the families of soldiers, saying she should have personally inspected the Abovian morgues.

On Wednesday the Armenian Revolutionary Federation Youth Organization of Armenia along with the ARF Nikol Aghbalian Student Organizations staged protest in front of the Health Ministry calling for Avanesyan’s resignation and expressing outrage and fury at the manner in which the remains of the soldiers, who gave their lives in defense of the homeland, had been disrespected.

Avanesyan, the acting health minister, reprimanded Avanesian Mher Bisharyan who heads the state center of forensic medicine overseeing the Armenian mortuaries, prompting him to fire the employees at the Abovian morgues.

“We fired them because they didn’t perform their duties properly,” Bisharyan told RFE/RL’s Armenian Service. He said they should have placed the remains on stretchers and stored them in a more orderly way.

Bisharyan claimed that the remains were taken to the Abovian facility because a refrigerated morgue truck where they were kept until May 28 broke down. He said they were “temporarily” stored in the basement due to a lack of space in the morgue’s refrigerated rooms.

The official added that the remains were transported on Tuesday to a refrigerated facility in Martuni.

Artash Khachatryan, a pathologist at the Martuni morgue confirmed to news.am on Thursday that the remains from Abovian had been transferred there.