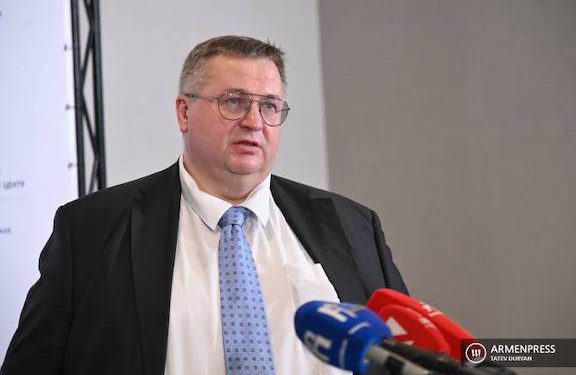 A working group comprised of the deputy prime ministers of Russia, Armenia and Azerbaijan has not discussed Baku’s much-touted opening of a corridor to Nakhichevan through Armenia’s territory, Russia’s Deputy Prime Minister Alexey Overchuk told reporters on Monday.

Overchuk, who is in Armenia to attend a business forum, said that instead the group has been discussing “the issue of unblocking economic and transport communications in the South Caucasus,” a provision of the November 9 agreement.

The Russia official pressed for the such opening of borders, expressing confidence that the unblocking of all economic and transport communications in the region will give an opportunity to increase the trade turnover between Armenia and Russia, Overchuk said, reported Armenpress.

“All parties are committed to unblocking economic and transport communications in the region. Of course, there are discussions on how to do it, but it is clear that the unblocking, the restoration of the transport communications will create significant new opportunities to expand and increase the trade turnover, including between Russia and Armenia,” said Overchuk, who said that the group met in late August.

Armenia’s Deputy Prime Minister Mher Grigoryan, who represents Armenia in the talks, on the other hand, said it would be difficult to predict that exact growth and the volume of trade at the moment.

Overchuk pledged that Russia will support Armenia to tackle its current economic crisis, as well as issues stemming from the COVID-19 pandemic, through “joint efforts.”

“The economic cooperation between Russia and Armenia has rather deep roots. Through joint efforts, we can help each other find answers to global challenges such as the economic crisis and the pandemic. Together we can achieve the best results and even surpass them. This year we already have seen positive results in the joint trade, which is a little over 17 percent,” said Overchuk, who added that the current turnover is far less than what should be between “strategic partners.”

“We have serious potential for growth in joint trade and investments, and most important, we have effective tools for cooperation. Russian and Armenian entrepreneurs receive support from the state, there is an opportunity to use the tools of Russian institutions,” said Overchuk, who expressed hope that the business forum in Yerevan would translate into new joint projects with Russia and its business community.

To that end, Russian-Armenian billionaire and businessman Samvel Karapetyan announced during the business forum that his Tashir Group will invest in Armenia’s energy and tourism sector.

Energy is the basis for sustainable economic development for any country, but in case of Armenia, it’s doubly important, Karepetyan said at the business forum, announcing plans to invest $600 million to advance Armenia’s energy security over five years.

He also announced that he and his company will invest $130 million to advance industrial output, tourism and businesses that have been started by young people.
“Economic development is impossible without the development of production capacities, including the application of new innovative solutions in that sphere. The development of new capacities is the driving force of the entire economy. It increases the export potential, provides jobs for the country’s population,” said Karapetyan who announced that $50 million will be allocated for innovation.