BY NORA MARKARIAN YACOUBIAN
We began our journey to Arstakh with military helicopters hovering over our head. We gazed at the sky in silence.
I sat next to Samvel, our Artsakhtsi driver while Vahakn sat in the back with a gentleman, and his young daughter. I sensed that the gentleman was no ordinary man, nor was our driver… their eyes had much to tell. It was in this very car that Vahakn had met Officer Gayane Harutyunova two years earlier. We discovered that the man with the light, intense eyes in the seat behind me was Major Nigola from the Military Air base in Artsakh. He insisted that we visit soon and have a private tour. A typical warm and welcoming Artsakhtsi hospitality. There was kindness in his voice. 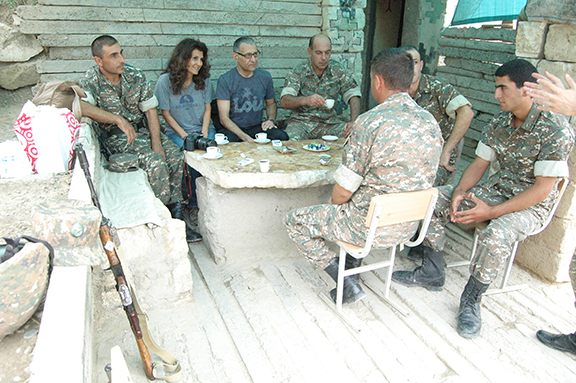 On April 2, a moment stopped in time. Our cellphones and computers were flooded with stories of Azeri attacks, killing 18 of our soldiers, our sons, brothers, husbands, breaching the cease fire agreement once again. We read in disbelief. How dare they! Our sacred land meant nothing to them, but everything to us. It defines who we are. Hundreds of thousands of Armenians around the world came together in solidarity and volunteered to help in every way possible. Never had a nation and its Diaspora become one fierce fighting unit! Hundreds of international reporters occupied our trenches to tell our story.The message was clear. We are determined… Artsakh belongs to us!
No amount of sophisticated enemy artillery or Israeli drones could break us. Paid mercenaries were prevented from advancing. The enemy acted like cowards, and resorted to barbaric practices. Yet, they could not crush our spirit. 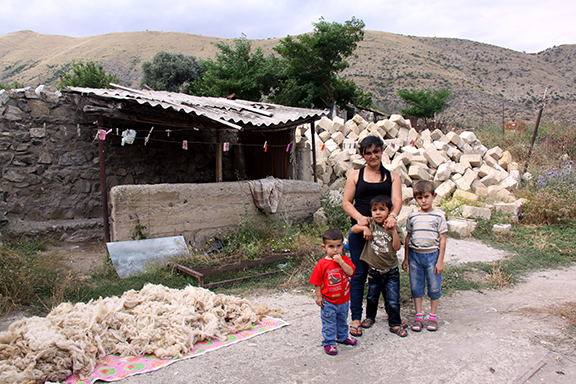 Veteran heroes from the 1992 war signed up along with their sons to once again protect and defend our borders. They came not only from Artsakh and every corner of Armenia, but the Middle East as well.
Again, we read in disbelief…
I too, was there in 1992, and had prayed never to see hostile conflict in this region again. But then again, Azeri appetite for historical Armenian lands cannot be underestimated. 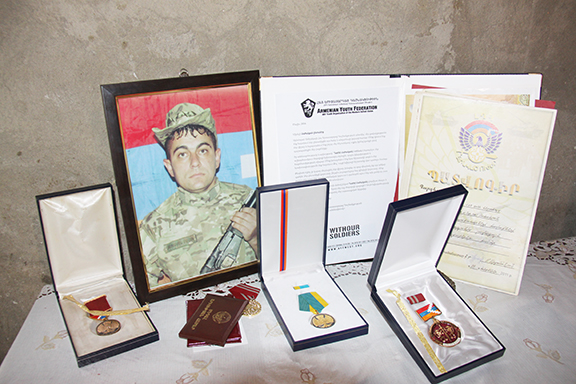 The faces of war were so much younger this time, average age being between 18 – 25… Sarkis, Vladamir, Hayk, Armen, Yuri.. yet they all fought with the heart of lions as did our former fedayees … Bedo, Shahen, Meroujan, Garod, and Monte…they were born defenders and protectors… freedom and independence at any cost…immortals in our collective memory. Several risked their lives to save their commorades or volunteered to get food and water supplies amidst enemy sniper fire. 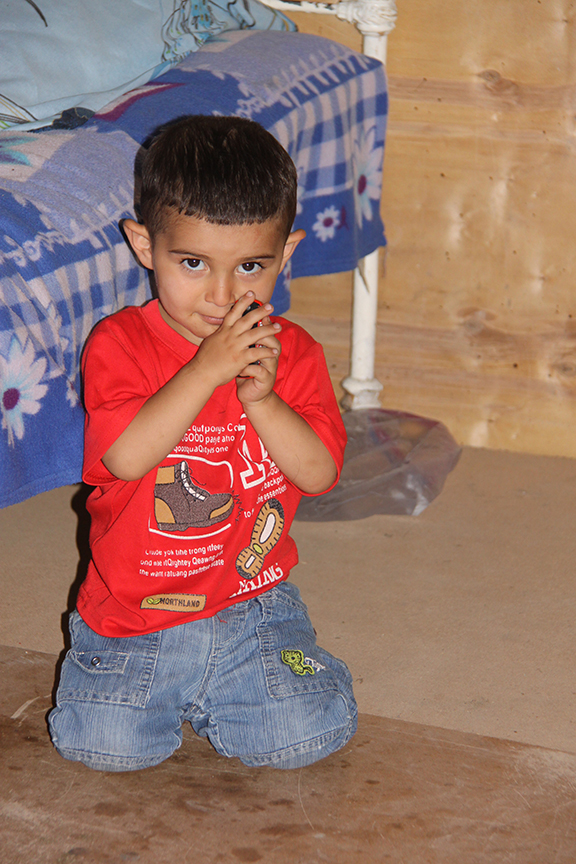 A young Armenian soldier, just recently out of high school, head-on downed an Azeri helicopter. 19 year old Robert Abajyan, wounded and alone, surrounded by Azeri Special forces and seeing no way out, pretended to surrender. He waited until the last possible second for the enemy to get closer. He then pulled the pin from his grenade, killing not only himself, but every single Azeri soldier as well. Blessed is the man that sacrifices his life defending his country. What secret power within fueled such braveness and courage? Priests, holding a cross in one hand, bearing arms in the other.
“Sirdernin nurp, payts Vahani bess”…Tender hearts, but as strong as armor! Armenian Olympian wrestling champion, Artur Alexanyan, upon winning a gold medal, ripped open his jacket, showing the world the face of a true hero on his t-shirt. We cheered and wept…Robert, millions around the world now know of your fearlessness and bravery
My beloved ancient Artsakh, with your soft purple sunrise and plush green forests.
My Musa Lertsi ancestors salute you! We share a similar history of heroic resistance. They too, ascended to our mountain, women and men, fighting alongside one another. Defeat was not for them!
There is an indescribable force that pours through their veins. It is contagious…every Armenian soldier, male and female, is miraculously ordained with this Godly inner strength. 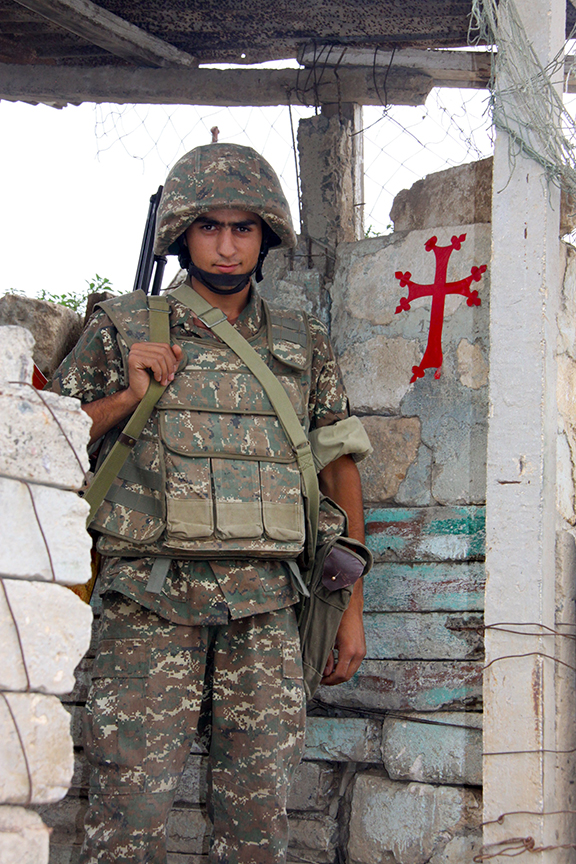 That night, we arrived at Park Hotel in Stepanakert. We were greeted by Unger Davit Ishkhanian and assigned to our rooms. We said our goodnights, and retired for the night. Sleep did not come easy. The following morning, we picked up Officer Kegham who was in charge of Public Relations for the army.
He escorted us to a region in Martuni to meet with our soldiers at the front lines. We found them in good spirits.
We were asked if we wanted to wear bullet proof vests even though we felt a sense of security amongst these young men.
As we walked through the trenches, we noticed that soldiers assigned to a specific post did not take their eyes off enemy lines.
The officer in charge pointed through the narrow opening of where weapons were fired from, just several hundreds of feet away. In the distance, we saw the areas where the faceless enemy was stationed. 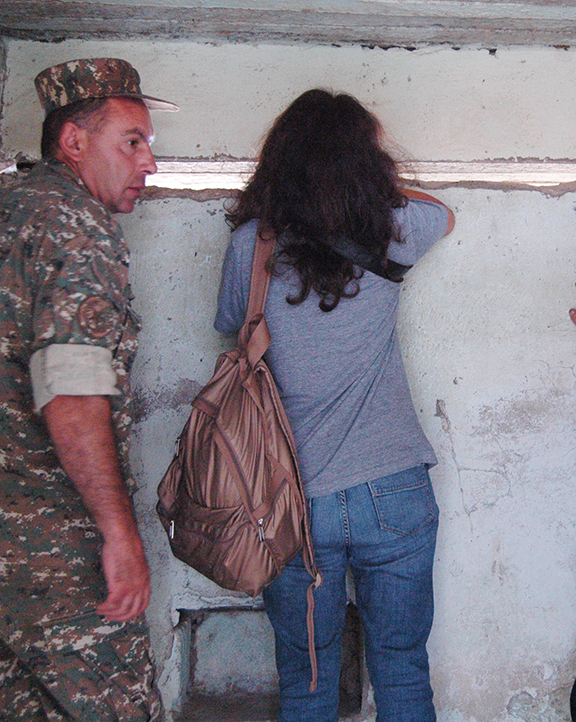 A young soldier made us Armenian coffee over a tiny fire. My motherly instinct to want to protect them overwhelmed me. I thanked them for their dedication and commitment for our collective struggle for self-determination. The young soldier on my right smiled and responded, “ but why do you thank us? Arstakh is ours, and we are committed with every last drop of blood that sours through our veins”.
Miles away, his mother and family waited, praying for it to all end, and for the boys and men to return home. I noticed the young man from Yerevan on my left and told him he had “happy eyes”. His face lit up with a huge grin. ( us sitting and having coffee with the soldiers)
The words of the late Vasken Sarkissian echoed inside of me..”Hoghe Yergir E (The Land is the Country).
Here we were, in the trenches surrounded by young men willing to sacrifice their lives for our beloved Artsakh.
We returned to the city of Stepanakert that afternoon. We decided to meet at Florence Cafe early evening. The images were still fresh… how could we eat or drink? Los Angeles felt a million miles away, another universe. Here, was where we belonged. Here, is where a small act of kindness can have a monumental impact. Here is where legends come from. Here is where we stand side by side with our soldiers. 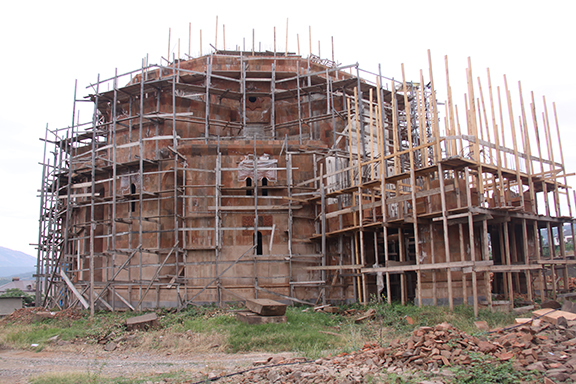 The city was vibrant with women and children strolling through the city’s center. Life in Arstsakh continued. The main square was filled with children in traditional costumes, entertaining us with patriotic songs and dances from various regions. Vahakn and I had the honor of sharing a bottle of Kataro White, wine made in the area, with First Deputy Minister of Foreign Affairs, Armine Alexanian, Nakagarno- Karabagh (Artsakh) Representative in Washington, Robert Avetisyan, and Advisor to the President, Georgi Petrosyan.
Although we came from different worlds, there was no question that we were “one”.
Aristotle had stated, “a true sign of friendship is one soul traveling in different bodies”. Artsakh was the soul of the Armenian people! 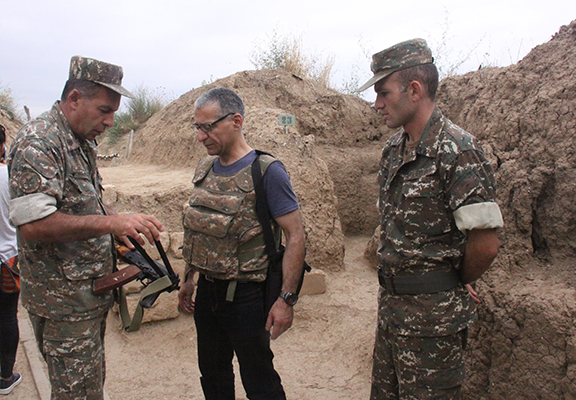 The following morning, Vahakn had arranged a trip for us to meet with Astkhig Sahakian, the wife of our fallen hero, Special Forces Officer Gharib, and her three children in Arevashad. Vahakn had chosen that area in particular since it was a grueling three hour journey from Stepanakert through mountainous and unpaved roads, and wanted to offer assistance. We finally reached our destination, a tiny stone house. We immediately recognized her from newspaper photographs. Three young boys ran out, sons of a hero, ranging from 3 years old to 6. We were invited in for coffee. After a long silence, we began to ask her a few questions. They had met as teenagers, married when she was 19 and relocated from Goris. She was 25 now, my daughter’s age, with no work experience and three children to care for. Her eyes filled with tears as she described her late husband as a devoted father, loyal friend, and highly respected by all who knew him. She brought out his medals and placed them neatly next to his picture in uniform. It was difficult to concentrate on what she was saying because her voice was so soft, and I could not tear my eyes away from her son, Alex, who was so playful and trying to get our attention. She had the painful task of teling them that their father will no longer be coming home. At times like these, there are no words of wisdom you can offer, no comfort, except to remind her that it is because of brave men like Gharib, the true “bahbans” (keepers) of Artsakh, that we savior freedom in our Homeland.
So many stories… where does one begin? Vardan, sending his wife and newly born son to Moscow and volunteering in the devastated area of Talish, lying to his father and insisting he was called to duty.
Andranik, from the Middle East, left a pregnant wife behind, to fight with his platoon and refused to abandon them after hearing the news of his newly born son.
Father Rafeal, urged the men to return to their families, yet he remained on the front lines until his untimely death by Azeri bullets.
It is unimaginable how the world remains indifferent to these atrocities and criminal act.The larger powers of the world focus on the wealth that can be acquired from the Azeri. But investing in Artsakh, is investing in a people of integrity, pride and unwavering loyalty to our historic land. 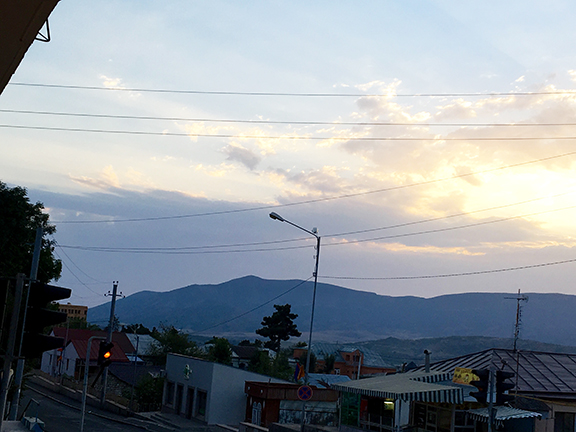 I woke up early our last morning to find Vahakn in the lobby of our hotel. He was solemn and in deep thought. I had expected that we would have a cup of Armenian coffee before we headed back to Yerevan. He stood up slowly, grabbed my hand, and said “follow me.” We walked quietly down the street towards the half-built church of Saint Asdvadzamor. We made our way through the wooden planks and stones, to an area where we assumed would be our Holy altar. Vahakn explained that it had tormented him that he had not yet gone to a church in Artsakh to light a candle of love and hope for our soldiers and their families. We both knelt on the rocky ground and prayed
A warmth permeated through our bodies as we promised our God and our beloved Artsakh that we would help defend it with all the honor and dignity it deserved.
As we left our church, I picked up a tiny red stone and slipped into my pocket. It would find its refuge in an old Armenian tarnished silver bowl in my living room in Los Angeles along with the sacred stones from churches from Khapret, Van, Ani, Kars, Akhtamar, Gheghart and Samosavank. They knew only too well of all our heroes that fought like lions!