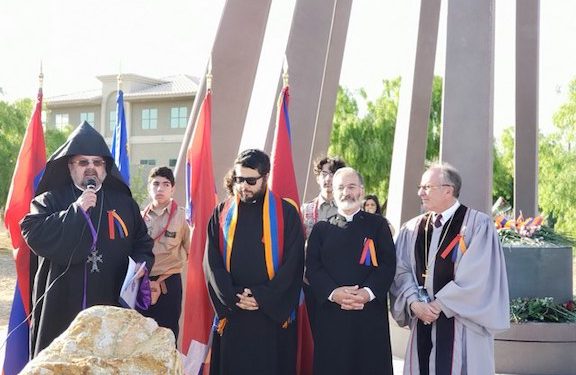 Since the erection of the monument in 2015, every April 24th, on the Armenian Genocide Remembrance Day, Armenians visit Sunset Park.

The community witnessed multiple generations visiting the monument and to pay their respects to the fallen, a solemn responsibility to educate the Las Vegas community and younger generations about the Armenian Genocide.

Armenian National Committee of America Nevada co-chair Lenna Hovanessian briefed attendees on the latest developments of the Nevada Holocaust and Genocide Education Bill that passed the 2021 Nevada Assembly, which mandates teaching the Holocaust and the Armenian Genocide to all Nevada High School students.

The vigil concluded by placing flowers at the eternity symbol platform of the monument.

Adroushan Andy Armenian is the Honorary Consul of the Republic of Armenia in Las Vegas.