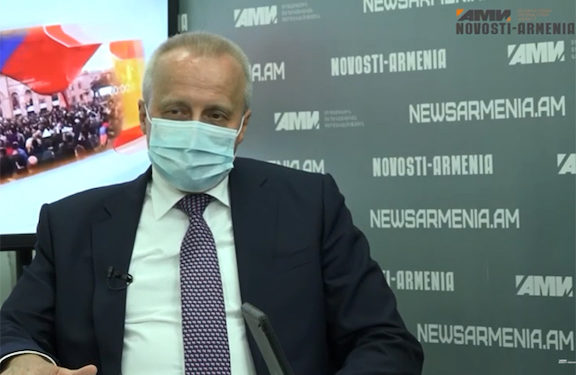 According to the ambassador, it is worth thinking about how to tackle the growing imbalance between the deep strategic relations between Russia and Armenia in such areas as defense, security, economy, and those prevalent external factors in such important issues as orienting the society’s values.

Kopyrkin pointed out that profound and dynamic changes were taking place in the world, in the South Caucasus region and in the broader areas surrounding this region.

“In fact, behind these sometimes dramatic events there is an obvious tendency toward the formation of a new world order. Now various forces, powers, blocs of powers, alliances of powers are fighting for positions in this new, not yet fully known world order,” he explained.

The ambassador noted that competing interests are sometimes taking on dramatic forms that are not always acceptable from a traditional diplomacy perspective and international relations.

“Under these conditions, relations between traditional allies, relations that have been tested for centuries, become even more important. The majority of the population of Russia and Armenia values these relations,” he stressed.

Kopyrkin said that this is a mutual matter for Russia and Armenia, which will help the countries to more successfully defend their interests in this difficult world.

“We all very vividly remember those dramatic events that took place a year ago [the 44-Day War in Artsakh]. During that difficult period for Armenia and the Armenian people it was Russia that stood by Armenia, providing it with support in general and in practical terms, Russia was the only entity that was on Armenia’s side,” claimed Kopyrkin.

The ambassador observed that various partners from different regions of the world are trying to get something of their own from the new, changing regional order, while a year ago “everyone was mostly silent.”