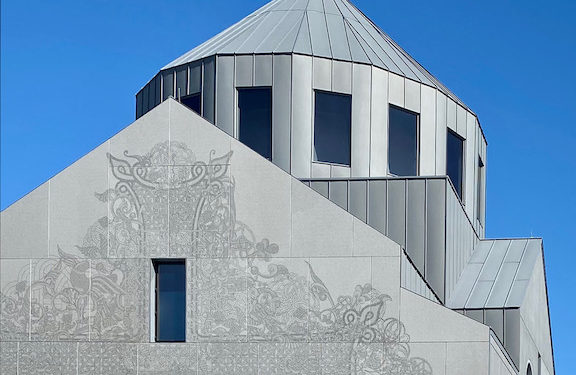 Entrance Facade, Honoring the 1.5 Million Victims of the 1915 Armenian Genocide, to be Unveiled on April 24

The new St. Sarkis Armenian Church in Carrollton, Texas, will be consecrated on April 23 and will hold its first Sunday Service on April 24, the date each year on which the Armenian Diaspora commemorates the Armenian Genocide.

Hotson and Terzyan began designing St. Sarkis with a brief that envisioned a new church building modeled on St. Hripsime, an ancient Armenian church that stands near Armenia’s capital, Yerevan. Having sheltered Armenian congregations through 14 challenging centuries of upheaval, St. Hripsime serves as a symbol of ancient origins of Armenian Christianity and of the endurance, perseverance, and resilience of the Armenian people.

From this brief, the architects developed a design that looks forward as well as backward, marrying ancient architectural and artistic traditions reflecting Armenia’s cultural legacy as the world’s first Christian nation with contemporary digitally-driven design and fabrication technologies. The design recreates the scale and proportions of St. Hripsime but modifies the exterior openings and interior spatial volumes to fill the sanctuary with indirect natural light. The result is an ethereal vessel of naturally illuminated space which suspends the memory of centuries of Armenian tradition over the modern congregation.

The St. Sarkis project consists of a three-building campus on five acres. Its centerpiece is the 250-seat church, which is approached through a shaded entry courtyard positioned between a building housing a community center including a 400-person event hall, Sunday school classrooms, and clerical offices, and another housing an athletic facility that serves the congregation.

The solid gray mass of the church exterior, rendered in modern materials, references the monolithic sculptural character of ancient Armenian churches, which were constructed entirely of stone. The juxtaposition of the monochrome architecture against the rich multicolored vegetation, envisioned and implemented by landscape designer Zepur Ohanian, evokes the relationship between monolithic architecture and verdant landscape that is typical of the ancient churches and monastery complexes that still survive throughout the Armenian homeland.

The western facade that surrounds the entrance to the church serves as a subtle but powerful memorial to the victims of the Armenian genocide.

Clad with porcelain panels covered with an intricate design printed at high resolution, the facade presents the viewer with a layered visual experience. Seen from a distance, the facade depicts a traditional Armenian cross or “tree of life” with distinctive branching arms, an Armenian symbol of faith in the face of suffering, of resurrection, and redemption. Viewed more closely as the visitor approaches the church, the cross is seen to be composed of interwoven botanical and geometrical motifs drawn from Armenian art, representing the bonds of ancestry and tradition that have bound the Armenian community together across centuries of challenge and upheaval. Examined from still closer proximity, the entire facade is seen to be covered by tiny icons or pixels, each one centimeter (or about 3/8 inches) in diameter.

1. The interior of the new St. Sarkis Armenian Church

These tiny icons—1.5 million in total, derived from the infinitely varied circular emblems that recur throughout the Armenian artistic tradition—cover the entire church facade. Like 1.5 million snowflakes, each individual pixel is unique, each representing one of the 1.5 million victims of the Armenian Genocide. The encounter with these individualized icons spreading across the entire building façade provides powerful impression of the scale of this historical atrocity.

David Hotson worked with Yerevan-trained architectural designer Ani Sahakyan on the overall facade design. A computer script was then developed in the office by architectural designer Ben Elmer to generate 1.5 million unique icons or pixels based on ancient Armenian ornamental motifs. These icons were distributed according to density to form larger-scale patterns when viewed from a distance.

In implementing the facade Hotson, collaborated closely with Fiandre, the innovative architectural surfaces manufacturer that has developed the revolutionary DYS system that allows printing at extremely fine resolution on Fiandre’s large-format, exterior grade, UV-resistant porcelain rain screen panel materials. Fiandre fabricated the facade panels in their Italian factory to the exact pixel modules required by the facade and printed the intricate design through an exacting process that was halted as the COID-19 pandemic caused total lockdown of Italian industry before resuming work and shipping the completed facade to Texas.

This facade is believed to be the first use of this technology, to optically engage the viewer in a series of visual scales nested inside each other, from the scale of an entire architectural facade to the scale of individual pixels each rendered in high-resolution at the threshold of visual perception.

Upon stepping through the memorial facade and into the church, the visitor emerges into the sanctuary, a composition of light-filled volumes modeled on the interior of St. Hripsime. A series of concave light coves, derived from the distinctive concave recesses on the exterior of the St. Hripsime, reflect the powerful Texas sunlight indirectly into the sanctuary, resulting in an ethereal quality of illumination. The doubly-curved plaster vaults that shape the interior space were fabricated in glass-fiber-reinforced gypsum directly from the architect’s computer model, through an innovative process developed by the Toronto-based manufacturer Formglas. The interior vaults are smooth and scaleless, with no visible lighting fixtures, air-conditioning registers or other contemporary technical details to interrupt luminous memory of the 1,400-year-old space of St. Hripsime suspended over the congregation.

The church is heated and cooled with a displacement climate control system, which uses a remotely located mechanical plant to introduce conditioned air at low velocity through floor registers located under the pews. The result is a silent interior, without mechanical vibration or the ambient sound of a conventional high velocity air conditioning system, providing a silent backdrop for the reverberant acoustics of traditional Armenian choral music.

St. Sarkis memorializes the ancient legacy of Armenian Christianity and the extraordinary strength, perseverance, and resilience of the Armenian people. It is a contemporary space, grounded in the present, that mourns the unimaginable multitude of martyrs of the recent past, while bearing an ancestral memory that harkens back to the origins of Christianity.

David Hotson, AIA, is the principal of David Hotson Architect, established in New York in 1991. Hotson’s projects include residential and institutional designs for private, corporate, and cultural clients. His work has been recognized with awards from the international Architizer A+ Awards program and the Best of Year Awards program from Interior Design Magazine. He is a graduate of the Yale School of Architecture.

Fiandre, a part of Iris Ceramica Group, is a global leader in the development and production of high-performance architectural surfaces for both interior and exterior applications. Headquartered in Castellarano, Italy, the company is renowned for its unmatched range of colors, textures, patterns and sizes of its finish materials including large-scale, lightweight porcelain slabs.

International Conference on Teaching of Armenian Genocide Kicks Off in Yerevan