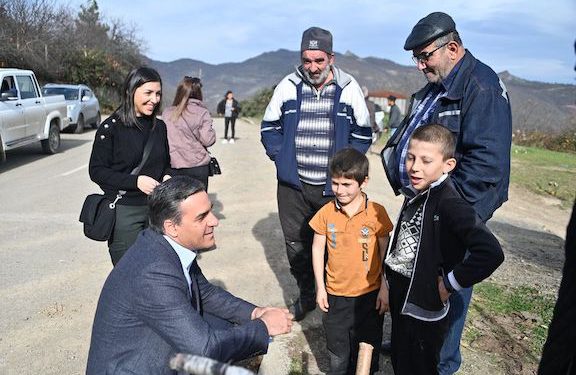 Armenia’s Human Rights Defender Arman Tatoyan on Tuesday warned that human rights and humanitarian issues must be of paramount concerns when Armenia embarks on the proposed process of delimiting and demarcating its borders with Azerbaijan.

“No one has the right to ignore human rights and humanitarian issues in the border demarcation process,” said Tatoyan in an announcement posted on Facebook, which detailed his latest observation from a fact-finding mission to Armenia’s Syunik Province.

Tatoyan, who just returned from a working visit to Los Angeles, where he received the Human Rights Champion Award from the Armenian National Committee of America-Western Region, hit the ground running and led a fact-finding mission to Syunik, where Azerbaijani forces have set up border checkpoints on two main roads in the region, impacting the daily lives of residents in the area.

Tatoyan and his team observed that Azerbaijan armed forces are able to monitor residents from the newly-created customs checkpoint on the Kapan-Tchakaten road, adding that the only way to safeguard the residents of those areas is to remove the posts.

The alternative road from Kapan to six villages—Tchakaten, Shikahogh, Srashen, Nerkin Hand, Tsav, Shishkert—is being monitored by Azerbaijani forces. Therefore, Tatoyan said, it is imperative to eliminate the source of the problem.

Since Monday, Tatoyan and his team have worked with Kapan Mayor Gevorg Parsyan and traveled around the region, speaking to residents and hearing their concerns.

The residents are concerned that, as was the case in the 1990’s, Azerbaijani soldier can target civilians traveling on the alternate roads and threaten lives by sniper fire and other military actions.

Furthermore, the terrain of the alternate road is difficult to traverse, especially during the winter, which will make parts of the road impassable.

Tatoyan pointed out that because of the Azerbaijani checkpoints, residents are unable to tend to fundamental daily activities, such as going to school, agricultural commerce and access to basic necessities.

He praised the efforts of local authorities, the Armenian border troops and the National Security Service personnel stationed in the region for doing their utmost to make the lives of residents more palatable.

However, he said, the rise in Azerbaijan’s state-sponsored anti-Armenian approach and government-sown hatred can acutely impact the safety of residents.

“Therefore, the necessary solution is that Azerbaijani armed or other servicemen should not be stationed in the vicinity of Armenian areas or on roads connecting those communities, and a demilitarized security zone should be created,” said Tatoyan, adding the only way to restore and protect the rights of Armenian citizens is for Azerbaijani to leave the area.