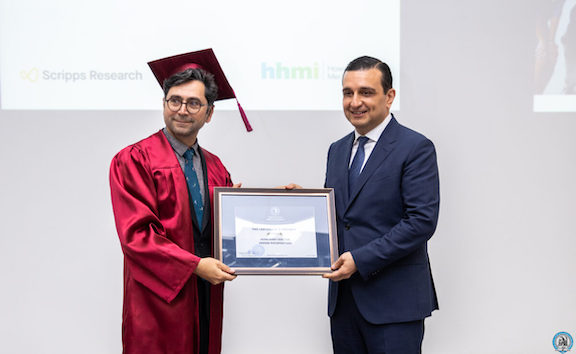 Nobel laureate and Armenian-American scientist Ardem Patapoutian was elected as an honorary member of Armenia’s National Academy of Sciences.

Patapoutian is on his first visit to Yerevan since winning the Nobel Prize in Medicine last year for his work as a molecular biologist and neurobiologist.

Ahead of his visit to Armenia, the Academy of Sciences decided on June 9 to name him an honorary member.

In his opening remarks, YSMU Director Armen Muradyan emphasized that it was a special day, since the only Nobel Prize laureate of Armenian descent will deliver remarks in the halls of the century-old university.

“What we have done is basic science just to discover how we sense touch, pain, blood pressure, etc. Anything that has to do with pressure. But these scientific discoveries will take ten to twenty years to translate into hopefully future medicine, whether it is to block chronic pain or regulate blood pressure, or other areas we didn’t think about right now,” Patapourtian told reporters at the Yerevan State Medical University.

“The beauty of basic science is that the translation will come with time and in directions that we might not have thought about early on,” he added.

In 2021 Patapourtian was awarded the Nobel Prize in Medicine for his discovery of receptors for temperature and touch.

Pataputyan was born in 1967 in Beirut. In 1986 he moved to the United States. In 1990 he received a bachelor’s degree in cell development biology from the University of California, and in 1996 he did his PhD in biology at the California Institute of Technology.

The scholar was also named into the Advisory Board of the COBRAIN Scientific-Educational Center for Fundamental Brain Research. Two of the seven Board members are now Nobel Prize laureates.

A descendent of Armenian Genocide survivors, Patapoutian revolutionized the field of neurobiology.