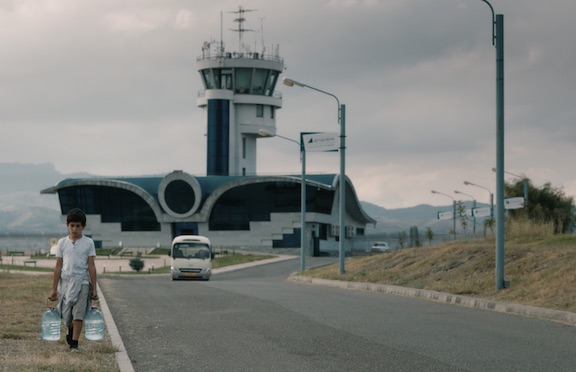 A scene from "Should the Wind Drop"

When the announcement was made last week that Armenia’s official selection for the Best International Feature category is Nora Martirosyan’s “Should the Wind Drop,” the University of Southern California’s Institute of Armenian Studies had already included this beautiful motion picture in a special film festival called USSR 30: Cinema After the Collapse. The festival is free and will take place November 4 to 6, at USC, LIVE, in person. [Register now.]

This year is not only the 30th anniversary of Armenia’s independence, but it is also the 30th anniversary of the collapse of the USSR – a socio-economic and political system that fell and took with it two of its most significant attributes: predictability and security. The consequences of this rupture continue to haunt and drive the lives of individuals and the development of societies in the 15 constituent republics that are now independent, albeit neither uniformly stable nor democratic, prosperous nor secure. How better to understand this seismic and traumatic transformation than through film?

The Institute is gratified that this program is included as part of USC’s exclusive and highly regarded Visions & Voices initiative. USC Professor Robert English, a scholar of Soviet and Russian history, will open the series on Thursday, November 4, at 7 p.m., with an overview of the implications of the Soviet collapse for the citizens of the 15 countries – ranging from Russia to Armenia. That evening’s film is Sergei Loznitsa’s “The Event.” The screening will be preceded by a conversation between Loznitsa and Atom Egoyan, a filmmaker whose own 1993 film “Calendar” was set in the newly independent Armenia.

On Friday, November 5, beginning at 6 p.m., in the presence of the filmmaker, a reception will mark the selection of “Should the Wind Drop” as Armenia’s Oscars contender. The film, shot from the perspective of a French engineer and completed in 2019, takes a calm, almost pragmatic look at what it would take to make the Stepanakert airport functional, and how that would impact the people of Karabakh (Artsakh) and the world. The film will screen at 7 p.m.

On Saturday, November 6, beginning at 1 p.m., five films ranging from feature to documentary, short and animation, made in Russia, Kyrgyzstan, Georgia and Armenia, will be screened.  Accompanying the films, there will be conversations with filmmakers and film scholars.

The last film is an animated short from Armenia called “Jazz – Fool Around” and it will be followed by a mini-jazz concert performed by students of the USC Thornton School of Music, in the Queen’s Courtyard immediately outside the theater.

Refreshments will be available throughout Saturday.

University health regulations require that each guest  complete TrojanCheck on the day of their visit to campus. Trojan Check verification must be presented at the event check-in.

Established in 2005, the USC Institute of Armenian Studies supports multidisciplinary scholarship to re-define, explore and study the complex issues that make up the contemporary Armenian experience—from post-genocide to the developing Republic of Armenia to the evolving diaspora. The institute encourages research, publications and public service, and promotes links among the global academic and Armenian communities.