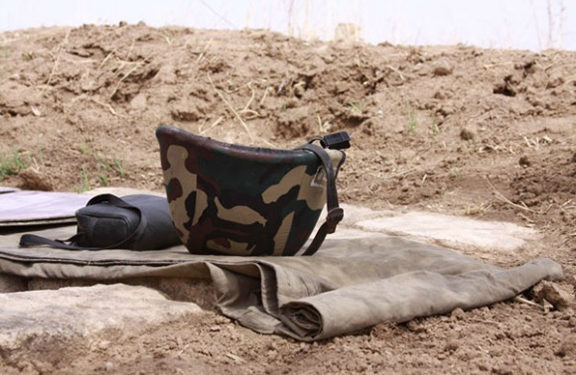 Another Armenian soldier was killed by Azerbaijani shelling

Azerbaijani forces opened fire on Monday on military positions in the western section of the Armenia-Azerbaijan border, killing one soldier and injuring another, as Azerbaijani soldiers continued their attacks on the Khramort village in Artsakh’s Askeran region.

Armenia’s Defense Ministry reported that around 12:40 local time, Azerbaijani forces opened targeted fire at military positions in the western section of the border near Yeraskh in Armenia’s Ararat Province. Sergeant Hrach A. Manasaryan died on route to the hospital. Another soldier was wounded.

Armenia’s Foreign Ministry condemned Monday’s attack in a statement, which also argued Yerevan’s long-held position that Armenian and Azerbaijani border guards must simultaneously withdraw and be replaced by international peacekeepers.

“Condemning the murder of a serviceman of the Armenian Armed Forces, we consider it necessary to emphasize that such incidents and regular violations of the ceasefire further substantiate the need for the simultaneous withdrawal of troops from the Armenia-Azerbaijan border and the deployment of an observation mission in the border area,” said the foreign ministry, which added that Azerbaijani forces systematically are increasing its aggression.

“We also consider it necessary for the international community to properly assess Azerbaijan’s provocative actions and statements,” said the foreign ministry.

No casualties were reported and the Russian peacekeeping forces were informed of the latest breach of the ceasefire agreement.

Since late last month, Azerbaijani forces have been firing at civilian and military targets near Khramort, with Artsakh’s prosecutor-general’s office saying that attacks are aimed at disrupting the normal life of the village and to impede farmers from completing their daily work.

“After days of threat of use of force and psychological pressure, this morning the Azerbaijani side resorted to provocation, opening intensive fire in the direction of the Armenian side. The situation was calmed as a result to the rapid response of the Russian peacekeeping forces,” Artsakh’s Prosecutor’s Office said on Saturday.

Azerbaijani forces have also restored to a new form of aggression against Artsakh civilian population, this time using loud speakers to broadcast threats in an effort to psychologically impact the residents of Artsakh. https://asbarez.com/artsakh-security-service-takes-action-to-halt-azerbaijans-psychological-intimidation/

“In addition to the information attack and psychological pressure with the threat of using military force and the dissemination of various statements over loudspeakers this morning, the Azerbaijani side once again resorted to provocation, firing intense shots in the direction of the Armenian side. Thanks to the prompt reaction of Russian peacekeeping forces the situation has stabilized,” the Prosecutor General’s Office said in a statement on Saturday.

Azerbaijani forces shelled the village of Nor Shen in Artsakh over the weekend, after which they demanded the residents of the village to leave or else face military retaliation, Metakse Hakobyan, a member of the Justice faction of the Artsakh parliament, told NEWS.am.

“Immediately after the incident, the residents of the village appealed to the head of the administration. The peacekeepers arrived very quickly and managed to resolve the situation.  However, the agricultural work could not continue and was stopped. The peacekeepers promised that they would accompany the farmers on the field for a month, so that they could carry out agricultural work until a solution is found,” Hakobyan said.

Aliyev Says ‘No One or Nothing Can Stop’ His Forces