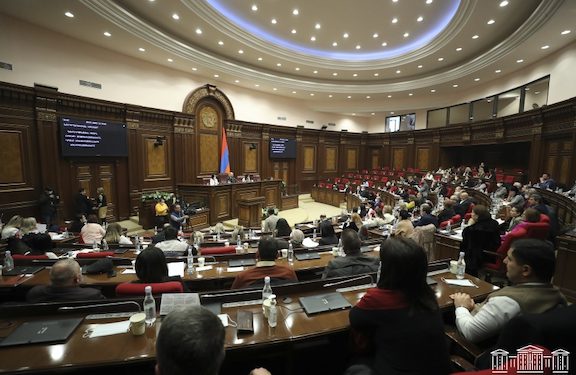 In a televised interview aired late on Monday, Pashinyan was asked to comment on the possibility of Armenian recognition of Azerbaijan’s territorial integrity through a “peace treaty” sought by Baku.

He responded by claiming that Armenia already did so when it signed and ratified in 1992 a treaty on the creation of the post-Soviet Commonwealth of Independent States (CIS).

“Armenia and Azerbaijan de jure recognized in 1992 the inviolability of borders and [each other’s] territorial integrity within the bounds of borders existing in the CIS,” he said.

Pashinyan also argued that territorial integrity of states has been one of the main elements of peace plans on Karabakh jointly drawn up by the U.S., Russian and French mediators.

Lawmakers representing the main opposition Hayastan alliance were quick to portray the remarks as further proof of Pashinyan’s readiness to end Armenian control over Karabakh. One of them, Gegham Manukyan, accused him of echoing “Azerbaijani arguments” in the conflict.

“According to him, Karabakh is Azerbaijan. Period,” another Hayastan deputy, Andranik Tevanyan, wrote on Facebook.

Tigran Abrahamyan of the Pativ Unem bloc, the other parliamentary opposition force, added his voice to these allegations on Tuesday.

“Nikol Pashinyan is trying to substantiate Artsakh’s being Azerbaijani territory,” he told a news conference.
Abrahamian also argued that the so-called Madrid Principles of a Karabakh settlement, which were first put forward by the mediating powers in 2007, include not only territorial integrity but also people’s right to self-determination.

Various versions of that peace plan stipulated that Karabakh’s predominantly Armenian population would be able to determine the disputed territory’s internationally recognized status in a future referendum.

Pashinyan has repeatedly criticized the proposed peace deal since Armenia’s defeat in the 2020 war with Azerbaijan. He claimed late last month that they envisaged the eventual restoration of Azerbaijani control over Karabakh. He also declared that “Artsakh (Karabakh) could not have ended up being completely Armenian.”

Those remarks were condemned by the Armenian opposition as well as Karabakh’s leadership. The latter openly accused Pashinyan of making statements playing into Baku’s hands.

In a January 2021 article, Pashinyan likewise said that the U.S., Russian and French co-chairs of the OSCE Minsk Group sought a “surrender of lands” to Azerbaijan and offered the Armenian side nothing in return. The then Russian co-chair of the group, Igor Popov, bluntly denied the claim.