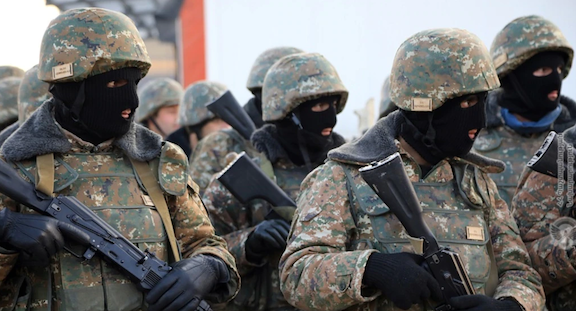 Armenian troops ahead of boarding a plane bound for Kazakhstan on Jan. 7

YEREVAN (Azatutyun.am)—The main opposition Hayastan alliance continued to demand on Tuesday that the Armenian government provide further explanations of its decision to join a “peacekeeping” operation in Kazakhstan launched by the Russian-led Collective Security Treaty Organization.

The military alliance deployed more than 2,000 troops there late last week after anti-government protests sparked by a surge in fuel prices turned violent and plunged the Central Asian state’s largest city, Almaty, into chaos. Armenia contributed 100 soldiers to the contingent, a move criticized by opposition and civic groups.

Hayastan, which has the second largest group in the Armenian parliament, said over the weekend that Yerevan should have supported the Russian-led intervention in Kazakhstan without committing any troops. The bloc led by former President Robert Kocharian went on to demand that the parliament committees on defense and foreign relations hold a joint meeting on the Armenian deployment.

Gegham Manukyan, a parliament deputy from Hayastan, insisted on the demand during a regular session of the committee on defense. He said Armenian military and security officials as well as diplomats should appear before lawmakers to present more convincing arguments for Armenia’s participation in the CSTO operation.

The pro-government chairman of the committee, Andranik Kocharyan, questioned the need for such a discussion while saying that he has no problem with organizing it. There were no signs in the following hours of any preparation for the emergency meeting sought by Hayastan.

Prime Minister Nikol Pashinyan was the first to publicly announce early on Thursday the CSTO deployment in his capacity as the rotating chairman of the Russian-led alliance. He said that the unrest put Kazakhstan’s national security and sovereignty at serious risk.

Critics argue that Kazakhstan and other CSTO member states failed to provide Armenia with military assistance requested by Pashinyan after Azerbaijani troops crossed into Armenian territory in May. Also, Kazakh leaders openly congratulated Azerbaijan on its victory in the 2020 war in Nagorno-Karabakh.

2 Armenian Soldiers Killed, 3 Wounded After Another Azerbaijani Attack on Gegharkunik