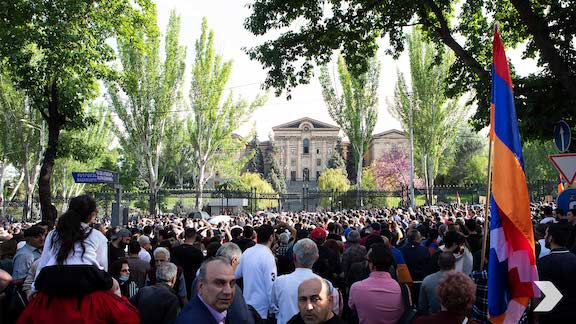 Parliament opposition Armenia and I Have Honor alliances officially submitted their demands for Prime Minister Nikol Pashinyan’s resignation on Wednesday charging him for mishandling peace talks with Azerbaijan and bringing “war and defeat upon us” in 2020. Outside Parliament, thousands of protesters continued their demonstrations calling for Pashinyan’s ouster.

In a statement directly addressed to Pashinyan, Armenian Alliance lawmaker Armen Rustamyan accused the prime minister of “failing to defend Armenian interests” in ongoing Karabakh negotiations, to ensure the return of Armenian prisoners of war held in Azerbaijan, and to resolve long-standing economic issues in the country.

Rustamyan placed the blame on Pashinyan for Armenia’s defeat in the 2020 war, and declared that “Nikol Pashinyan is not legitimate, and our state does not have a mandate to make new concessions. He must resign.”

Rustamyan also accused Pashinyan of breaking his campaign promises from last year’s election, among them his pledge to fight for the right to self-determination of the people of Artsakh.

The opposition leader also said that Pashinyan is not prepared to assist Azerbaijan to regain complete control over Artsakh—a charge that has become the impetus for the opposition’s ongoing protests to oust the prime minister and his government.

As expected, Pashinyan rejected the Rustamyan’s and the opposition’s demands for his resignation and, once again, blamed former president Serzh Sarkisian for the 2020 Artsakh war by “failing in the negotiation process” during his ten-year term.

“If you think that you can justify the disasters brought by you upon this country by putting the blame on the former authorities, you are mistaken,” Rustamyan charged in response to Pashinyan’s response, after which members of the opposition Armenia and I Have Honor alliances stormed out of the parliament, with some chanting “Armenia without Nikol,” a familiar slogan by protesters.

Outside the Parliament building, thousands of protesters had gathered in what was the fourth day of the civil disobedience campaign that has been dubbed the “Resistance Movement.” The protesters heeded the calls from organizers to not approach the entrance or attempt to break through the police barricade.

The protests and the renewed call for Pashinyan’s resignation was prompted by the prime minister’s speech to parliament last month, when he claimed that international pressures have moved his government to agree to engage in peace talks with Azerbaijan, which is demanding that Armenia recognize its territorial integrity, that includes Artsakh.

Earlier on Wednesday, Armenia’s National Security Service, citing “credible sources” warned that opposition forces were planning to breach security and seize the parliament building and deployed a large number of riot police around the parliament compound.

Opposition leaders said that the NSS warning was an intimidation tactic by Armenia’s security apparatus, claiming that people were planted among the protesters to storm the parliament to provide an opportunity for police to arrest protesters. Despite this, a scuffle between protesters and security forces took place.

“They are intimidating citizens with false claims so that citizens do not express their civic position,” Gegham Manukyan, a leader of the opposition Armenia Alliance told RFE/RL’s Armenian Service.

The protesters then moved to France Square, which the opposition has chosen as the epicenter of its “indefinite sit-in,” following a massive rally on Sunday, which drew tens of thousands of participants.

Wednesday marked the third consecutive morning of civil disobedience actions in Yerevan, with protesters blocking major intersections and highways in the capital, including parking trucks and large vehicles in an effort to halt traffic into and within the city. By late morning, all the blockades had been cleared and traffic was restored.

Since Monday, security forces have detained hundreds of protesters—250 on Monday and around 160 on Tuesday. While most of them have been released, some 40 demonstrators remain in custody, according to police.

In addition to disproportionate use of force, Grigoryan’s office also reported other instances of police misconduct, including detaining demonstrators without explaining charges against them and holding detainees without charge beyond the maximum time limit set out in Armenian law.