Opposition Not Satisfied With Security Briefing About Border Situation 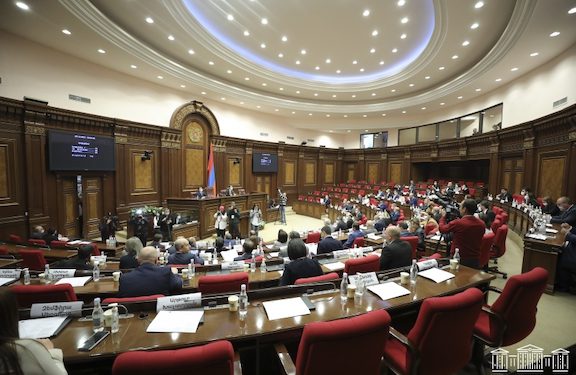 YEREVAN (Azatutyun.am)—Opposition deputies complained that senior military officials shed little light on the situation along Armenia’s border with Azerbaijan during a special session of the National Assembly held behind the closed doors on Tuesday.

The parliament’s two opposition factions demanded such a briefing immediately after Azerbaijani authorities began levying on September 12 hefty duties from Iranian vehicles passing through an Azerbaijani-controlled section of the main highway connecting Armenia and Iran. They said Defense Minister Arshak Karapetyan and National Security Service (NSS) Director Armen Abazyan must come to the National Assembly to answer their questions.

The parliament’s leadership took more than a month to organize the discussion. Deputies representing the Hayastan and Pativ Unem blocs as well as the ruling Civil Contract party were briefed by Kamo Kochunts, the first deputy chief of the Armenian army’s General Staff, and Arman Maralchyan, the commander of Armenian border guards.

Pativ Unem’s Taguhi Tovmasyan walked out of the chamber midway through the session. She said the generals refused to provide new information on the grounds that they cannot disclose “state secrets.”
“I am deeply disappointed,” Tovmasyan told reporters. “I left the discussion because I didn’t want to keep listening to that buffoonery.”

Hayastan’s parliamentary leader, Seyran Ohanyan, was also dissatisfied. Ohanian, who had served as defense minister from 2008-2016, suggested that more high-ranking security officials could have shared more information with the legislators.

Ohanian also said the briefing reinforced his belief that a Russian-brokered ceasefire agreement that stopped last year’s war in Nagorno-Karabakh did not require Armenian withdrawal from strategic areas along Armenia’s southeastern Syunik province.

Prime Minister Nikol Pashinyan ordered Armenian army units and local militias to pull out of those areas last December. Pashinyan said that they are located on the Azerbaijani side of Armenia’s Soviet-era border with Azerbaijan, which had never been demarcated due to the Karabakh conflict.

The order, strongly condemned by the Armenian opposition and local government officials, left Azerbaijani forces in control of a 21-kilometer stretch of the main highway connecting Syunik’s capital Kapan to another provincial town, Goris.

During the same session, security officers dragged an Armenian opposition lawmaker from the parliament podium after he strongly criticized one of his pro-government colleagues on Tuesday.

The incident occurred during a heated debate in the National Assembly on opposition demands for a parliamentary inquiry into the alleged misuse of funds collected by a government-backed pan-Armenian charity for Nagorno-Karabakh during last year’s war with Azerbaijan.

Vigen Khachatryan, a deputy from the ruling Civil Contract party, accused the parliamentary opposition of trying to discredit the Hayastan All-Armenian Fund and the Armenian government with various “abominations.”

Gegham Manukyan of the main opposition Hayastan alliance responded by recalling and condemning Khachatryan’s recent remark that continued Armenian control over Karabakh is not vital for Armenia.
“He who renounces Artsakh is a traitor,” Manukyan charged on the parliament floor.

Ruben Rubinyan, the parliament’s pro-government deputy speaker chairing the session, accused Manukyan of breaching “ethical rules” before switching off his microphone and ordering uninformed officers of the State Protection Service (SPS) to forcibly remove the prominent opposition figures from the podium. The session was interrupted as a result.

Manukyan stood by his statement and accused the authorities of trying to stifle free speech in the parliament when he spoke with journalists after the incident.