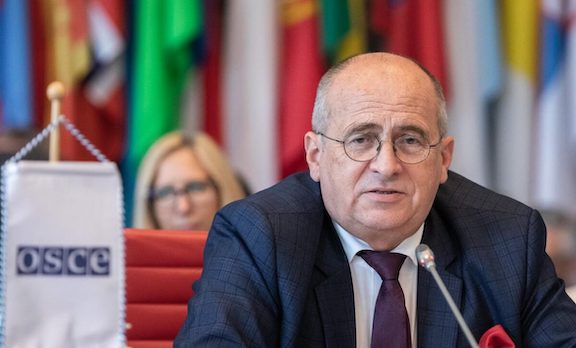 The OSCE should strengthen efforts aimed at establishing lasting peace in the South Caucasus, OSCE Chairman-in-Office, Polish Foreign Minister Zbigniew Rau said as he presented the main objectives for the organization as Poland assumes the group’s chairmanship in 2022.

“Following the cessation of hostilities in and around Nagorno Karabakh, we have to renew and strengthen our efforts aimed at establishing lasting peace and promoting prosperous development in the region,” Rau stated.

He noted that the Polish chairmanship will pay a special attention to improving the security situation in the OSCE area, especially by contributing to finding peaceful solutions to regional and protracted conflicts.

“The OSCE is well positioned to help mitigate the existing disputes, while fully respecting various points of view, providing that all interested parties approach the dialogue in good faith,” Rau added, emphasizing the need to make humanitarian considerations a focal point of the group’s efforts.

“Behind any protracted conflict there are people that suffer the most. It is our obligation, as the OSCE to protect and support the weakest—civilians, women and children—from consequences of conflicts,” said Rau.

“To effectively ease their plight, we must be guided as much by political consideration as by moral imperatives. The OSCE will not succeed unless we recommit ourselves to human rights, values of freedom and democracy and re-projection of power by good practices rather than resorting to threats of using military means,” the Polish foreign minister added.

The remarks come a day after Azerbaijan’s President Ilham Aliyev said in a televised interview that he will continue his efforts to thwart the OSCE Minsk Group’s effort to mediate the Karabakh conflict.

“They [the Minsk Group] should not deal with the Nagorno-Karabakh conflict, because it is resolved,” he said in an interview with Azerbaijani TV channels.

Aliyev stated that first of all, it is necessary to determine to what extent the co-chairmanship in the Minsk Group today corresponds to the realities of the time, whether there is a need to change the co-chairs.

“Many do not even know what kind of group it is. The sequence should be like this. Firstly, it is necessary to clarify the viability of this group. Secondly, they should present an agenda of what they plan to do, and the agenda should be agreed among themselves. Then the Azerbaijani and Armenian sides should express their positions about this. These first two points are not yet available. Therefore, in principle, it makes no sense to talk about this topic,” Aliyev stated.