Over 65 House Members Call for $100 Million in U.S. Aid for Artsakh and Armenia 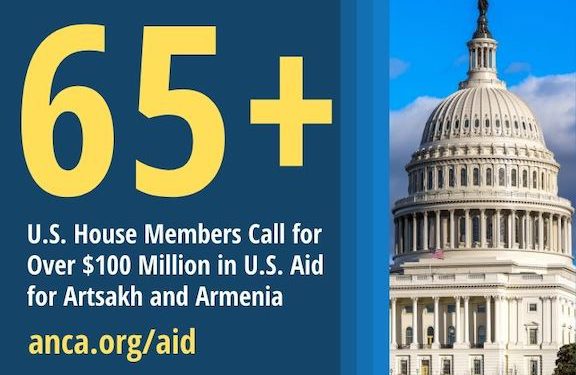 WASHINGTON—A bipartisan group of more than 65 U.S. House members joined in the Congressional Armenian Caucus request for the House Appropriations to allocate over $100 million in U.S. aid to Armenia and Artsakh following Turkey and Azerbaijan’s devastating attacks last year, a key policy priority of the Armenian National Committee of America.

“We want to thank Armenian Caucus leaders and Congressional cosigners from across the U.S. for supporting U.S. re-engagement through robust U.S. assistance to Artsakh, an immediate cut-off in all U.S. aid to Azerbaijan, and strong support for the sovereignty of Armenia as a pillar of regional security architecture,” said ANCA Government Affairs Director Tereza Yerimyan. “We look forward to working closely with House and Senate appropriators to ensure maximum funding reaches Armenians displaced by Turkish and Azerbaijani aggression, as Artsakh rebuilds from the devastating war.”

“The United States is uniquely positioned to help Armenia that has been shaken by last year’s war in Artsakh and the resulting uncertainty. Providing significant economic assistance to Armenia will help make its people more secure, bolster its democracy, help sustain economic development, stabilize its civil society, and aid its response to the COVID-19 pandemic and, most urgently, alleviate the ongoing humanitarian crisis in Artsakh,” said Congressional Armenian Caucus Co-Chair Frank Pallone (D-NJ), who along with Co-Chair Jackie Speier (D-CA) and Vice-Chair Adam Schiff (D-CA), led the effort. “This investment will strengthen the U.S.-Armenia relationship, help Armenia rebuild, and solidify democracy in the region,” concluded Rep. Pallone.

In a letter to their Congressional colleagues, Reps. Pallone, Speier, and Schiff  wrote: “The below requests for Armenia and the Republic of Artsakh in the Fiscal Year 2022 State, Foreign Operations and Related Programs appropriations bill are critical for assisting the country in helping to make its people more secure, bolster its democracy and sustainable economic development, stabilize its civil society, aid its response to the COVID-19 pandemic and, most urgently, alleviate the ongoing humanitarian crisis in Artsakh,” which included the following budgetary requests:

— $100 million for economic, governance, rule of law, and security assistance to Armenia through State Department and USAID accounts.

— The suspension of all U.S. security assistance for Azerbaijan until it has been verified to have ceased all attacks against Armenia and Artsakh.

Over 50,000 letters were sent through the ANCA March to Justice advocacy portal urging legislators to cosign the Armenian Caucus letter to U.S. House appropriators.

The full text of the letter is provided below and the pdf available is available here:

We write to thank the Appropriations Subcommittee on State, Foreign Operations, and Related Programs for its longstanding leadership in support of the Republic of Armenia and the Republic of Artsakh (Nagorno-Karabakh). As you prepare the Fiscal Year 2022 foreign aid bill, we ask you to include the below provisions that would enable the United States to re-engage effectively in this region and expand our U.S.-Armenia strategic partnership based upon shared interests and common values.

Humanitarian and Demining Assistance in Artsakh (Nagorno-Karabakh)
The people of Artsakh are facing an ongoing humanitarian crisis resulting from the unprovoked Azerbaijani and Turkish attack in Artsakh on September 27, 2020, which led to six weeks of devastating fighting that killed over 5,000 people and forced more than 100,000 ethnic Armenians to flee Artsakh. Azerbaijani forces made rapid advances into the region with the aid of Turkish Bayraktar drones that utilize American components and technology, heavy weaponry including illegal cluster and white phosphorus munitions, and Turkish-backed foreign mercenaries, many alleged to have ties to internationally recognized terrorist groups.

While Armenia, Azerbaijan and Russia signed a tenuous ceasefire that went into effect on November 10 that brought an end to the fighting, the destruction and devastation caused by Azerbaijan’s aggression will continue to affect the region for years to come. We believe the U.S. must act in a timely manner to provide a robust humanitarian assistance package for Artsakh. This direct funding will help provide aid for refugees, housing, food security, water and sanitation, healthcare, rehabilitation, and demining/UXO clearance. It will empower the people of Artsakh to reconstruct their communities, rebuild their lives, and resettle in their homes.

An aid package would be consistent with past U.S. investments in humanitarian assistance and a negotiated peace to the Artsakh conflict, including aid for the vital U.S. government-funded landmine and unexploded ordnance clearance efforts in the region. Since 2000, the HALO Trust, which operates the program, has cleared over 500 minefields in Artsakh, saving civilian lives and returning many acres of land safely to their communities. Unfortunately, the recent fighting reversed much of this progress as the Azerbaijani bombing campaign indiscriminately targeted civilians and telecommunications, transportation, health, and energy infrastructure in large population centers like Stepanakert. As a result, there is a continued and demonstrable humanitarian need for funding this important program, which has a long history of Congressional support and was included in the FY21 House-passed appropriations bill. We urge you to include the following provisions in the foreign aid bill:

·    Of the funds appropriated by this Act, not less than $2,000,000 shall be made available for Conventional Weapons Destruction programs in Nagorno Karabakh.

Economic, Governance, Rule of Law and Security Assistance
The United States is uniquely positioned to make important diplomatic advances in the South Caucasus at this critical juncture. This is especially true in Armenia, a young democracy that has been shaken by last year’s war in Artsakh and the resulting uncertainty. Providing significant economic assistance to Armenia will help make its people more secure, bolster its democracy, help sustain economic development, stabilize its civil society, and aid its response to the COVID-19 pandemic and, most urgently, alleviate the ongoing humanitarian crisis in Artsakh.

We believe that this critical U.S. investment will strengthen the U.S.-Armenia relationship, aid in rebuilding, and solidify the U.S. presence and influence in the region. This is especially true with concern to the State and Foreign Operations Subcommittee, which has been generous in its support of Armenia and Artsakh in previous Congresses.

·    Of the funds appropriated by this Act, not less than $100 million shall be made available for security, economic, governance, and rule of law assistance to Armenia. An increase in funding to accounts such as the Department of State’s Office of the Coordinator of U.S. Assistance to Europe and Eurasia and the U.S. Agency for International Development’s Bureau for Europe and Eurasia should be made available for these purposes.

Shockingly, Azerbaijan received over $100 million in U.S. military assistance in Fiscal Years 2018 and 2019 through the Section 333 Building Partner Capacity program. This defies almost two decades of parity in U.S. security assistance between Armenia and Azerbaijan. It also does not send a supportive, pro-democracy signal to our partners in the region. Azerbaijan received significant American security assistance when it was planning the attacks against Artsakh that led to senseless violence and destruction.

Furthermore, Azerbaijani President Ilham Aliyev, with the support of Turkish President Erdogan, continues to inhibit the resolution of the Artsakh conflict with his incendiary rhetoric and refusal to release an estimated 200 prisoners of war and civilians currently being held by his forces and subjected to documented abuse and mistreatment. His actions are antithetical to U.S. interests in the region and the pro-peace mission of the OSCE Minsk Group in recent years. Considering his refusal to end his threat of violence, his continuous arms build-up, and ongoing aggression against Armenia and Artsakh, we urge the Subcommittee to include the following language into the bill:

·    Suspend U.S. military aid, including under Section 333 Building Partner Capacity Program, to Azerbaijan until its government ceases its attacks against Armenia and Nagorno Karabakh, and agrees to an equitable resolution of the conflict.

·    Add the following certification requirement to the President’s waiver authority under Section 907 of the FREEDOM Support Act: ” No funds appropriated or otherwise made available under this Act may be provided to the Government of Azerbaijan until the President determines, and so reports to the Congress, that the Government of Azerbaijan is taking demonstrable steps to cease all blockades and other offensive uses of force against Armenia and Nagorno-Karabakh.”

Again, thank you for your leadership on the Subcommittee. The provisions highlighted in this letter will help contribute to democratic values in the South Caucasus and further strengthen the U.S.-Armenia strategic partnership. We appreciate your consideration of these requests.