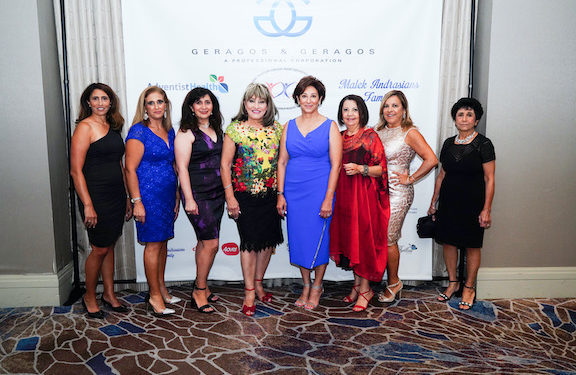 LOS ANEGELES—The annual Gala of the Armenian Bone Marrow Donor Registry was held on the evening of August 28 at the Glendale Hilton, in Glendale, California. Over 300 supporters, including community leaders, elected officials, and representatives of various organizations, attended the Match for Life Gala, which celebrated the 23rd anniversary of the Registry.

Functioning as a testament to the worldwide Armenian community’s support of ABMDR’s life-saving mission, the Gala served as an occasion to mark the Registry’s latest accomplishments and honor a number of individuals for their extraordinary dedication. Match For Life was made possible by the sponsorship of several supporters, including Event Sponsor Mark Geragos, Esq., and Major Sponsors Adventist Health Glendale and the Malek Andrasians family.

Following a cocktail hour and silent auction in the foyer and terrace of the Hilton’s “Glendale” Ballroom, the evening’s main program began inside the hall. The Gala’s Master of Ceremonies was Dr. Vicken Sepilian, President of the Armenian Medical International Committee and a longtime ABMDR supporter. “Tonight, we celebrate ABMDR as an organization whose work makes a positive impact on the lives of so many of us, whether we’re patients, bone marrow donors, volunteers, or supporters,” Dr. Sepilian said in his opening remarks. “We’re also here to celebrate perseverance and generosity: the perseverance of patients who are fighting a potentially-lethal illness; and the generosity of those who donate bone marrow stem cells to save the life of a patient.”

The Gala’s invocation was performed by Fathers Shannakian and Petoyan, after which a moment of silence was observed in honor of all those in Armenia and Artsakh who have fallen victim to war in the past several years.

Subsequently remarks were delivered by Gala co-chairs Gayaneh Kostikyan and Annethe Postik. “Volunteering for ABMDR for the past several years has been one of the most rewarding experiences of our lives,” Kostikyan said. On her part, Postik stated, “The dedication of our outstanding Lab staff and legions of volunteers across the globe is reflected in the success of this organization. With the continued generosity of our supporters, ABMDR will expand its mission of saving lives while inspiring a new generation of activists.”

Kostikyan went on to thank a number of donors for helping make the Gala a success, including Mission Wine and Spirits, Nazik Bashkijian, Café Santorini, and Dr. Vergine Madelian.

Next to come to the podium was ABMDR President Dr. Frieda Jordan, who delivered the evening’s keynote address. “Whenever Armenia and the Diaspora collaborate, they can create magic,” Dr. Jordan said. “This is what transpired 23 years ago. In 1999, compelled by the dire need to help Armenian patients all over the world receive life-saving bone marrow transplants, experts in Armenia and the Diaspora joined forces to create ABMDR.”

“The same spirit of Armenia-Diaspora collaboration shined again in the course of the past two years,” Dr. Jordan continued. “It made it possible for us to not only continue providing support to all of our cancer patients and forge ahead with our operations, despite the challenges of the pandemic, but also to conduct a significant research project. Aiming to understand the role of HLA molecules in the regulation of the body’s response to COVID-19, our research article was published online, in the international journal ‘Frontiers in Immunology’.”

Dr. Jordan also announced that ABMDR has recently launched its own youth group, called ABMDR NextGen, through the initiative of Eric Markarian, one of the youngest members of the ABMDR Board. “Youth power is the key to survival and success for any organization, and we have no doubt that members of NextGen will promote a high level of youth involvement in our work and support our mission,” Dr. Jordan said.

Also delivering remarks was ABMDR Executive Director Dr. Sevak Avagyan. He said, “Tonight, I am delighted to inform you that we will soon have the opportunity to bring the number of transplants which we have facilitated to 40, as we have two more harvesting procedures scheduled for this month, for a patient in Los Angeles and another in Germany. Both of their donors are from Armenia!”

“Our professional operations never stopped during the pandemic, but were actually expanded, with our COVID-research project,” Dr. Avagyan continued. “Moreover, our work was once again recognized internationally this year, when Armine Hyussyan, our Lab Supervisor, was appointed as an inspector with the European Federation of Immunogenetics (EFI). For the past several years, Dr. Frieda Jordan was the only person in Armenia, and in fact the whole Caucasus region, to hold this prestigious post. Now both Dr. Jordan and Mrs. Hyussyan are official EFI inspectors, in charge of assessing the work of tissue-typing and immunology labs in various countries for EFI accreditation.”

“Today, our pledge to our communities worldwide, stronger than ever before, is that ABMDR stands with them in our shared quest to save lives — because lives, including Armenian ones, do matter,” Dr. Avagyan concluded.

The ABMDR awards ceremony began following Dr. Avagyan’s address. The ABMDR Lifetime Achievement Award was conferred on renowned attorney, ABMDR Founding Member, ABMDR Chairman of the Board, and longtime supporter of the organization Mark Geragos, Esq. An ABMDR Volunteer of the Year Award was bestowed on Arax Badalian (on whose behalf the award was received by Sona Badalian). Table 22 Films (Garen Mirzaian) was named Business of the Year. And the Armenian American Medical Society was named Organization of the Year.

Afterwards, cancer survivor Alique Topalian, who was the inspiration behind the founding of ABMDR, as well as Hoori Sadler of the Persian American Cancer Institute, and bone marrow donor and longtime ABMDR supporter and volunteer Arpine Zohrabyan introduced the “Be an Angel, Save a Life” fundraising segment of the evening, featuring the young ABMDR Angels. This portion of the event was followed by a spirited tribute to the “King of rock ‘n roll,” performed by renowned Elvis impersonator Harry Shahoian.

Following this segment, the 2022 ABMDR Lottery winners were announced.

The celebration continued well into the night, with more performances by Harry Shahoian, while many more supporters participated in the silent auction in the foyer.

Established in 1999, ABMDR, a nonprofit organization, helps Armenians and non-Armenians worldwide survive life-threatening blood-related illnesses by recruiting and matching donors to those requiring bone marrow stem cell transplants. To date, the registry has recruited over 33,500 donors in 44 countries across four continents, identified over 9,000 patients, and facilitated 39 bone marrow transplants. For more information, call (323) 663-3609 or visit the website.

Aram I Elected President of World Council of Churches