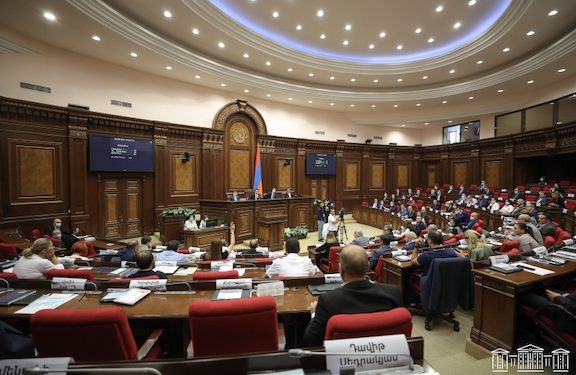 The government's five-year plan was approved by parliament on Aug. 26, with only Prime Minister Nikol Pashinyan's Civil Contract lawmakers voting

The opposition Armenia and I Have Honor blocs, which harshly criticized the plan, did not vote.

During the presentation of the plan, Pashinyan touted the need to open what is being called regional infrastructures, in what he said would be important for regional stability, at a time when Azerbaijani forces have advanced their positions inside Armenia’s sovereign borders for more than three months.

In the flawed plan presented to parliament, in between brawls between opposition and government lawmakers, Pashinyan pledges that the government will do its utmost to ensure peace and stability in the region.

Pashinyan said, ensuring the security, sovereignty and territorial integrity of Armenia, a “fair solution” to the Nagorno-Karabakh problem, and creating a favorable external environment around Armenia will remain priority tasks for his government.

Large-scale reforms in the army and active foreign policy to improve Armenia’s external security have also been highlighted in the government plan, at a time when Pashinyan has appointed loyalists with no diplomatic experience, Ararat Mirzoyan as Armenia’s Foreign Minister and Lilit Makunts as Armenia’s Ambassador to the U.S.

As an important security factor, Pashinian singled out Armenia’s strategic alliance with Russia and the country’s membership in the Russian-led Collective Security Treaty Organization, the chairmanship of which will be assumed by Armenia in the fall.

He also stressed the importance of continuing negotiations within the framework of the OSCE Minsk Group co-chairs aimed at determining the final status for Nagorno-Karabakh.

Opposition forces view Pashinyan’s overtures for peace and regional stability as a harbinger of more “capitulation,” as they blame the prime minister for the embarrassing defeat of last year’s 44-Day war, which resulted in surrender of Armenian territories to Azerbaijani in both Armenia and Artsakh.

Opposition representatives have been vocal in their criticism of Pashinyan for not only mishandling of the war, but also the coronavirus pandemic, which claimed more than a 1,000 lives.