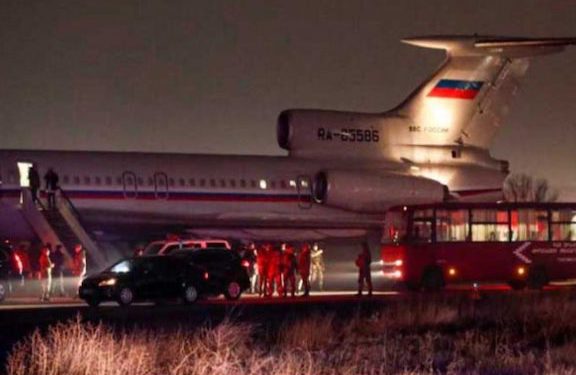 A plane carrying 10 Armenian captives landed in Yerevan on Dec. 5

YEREVAN (Azatutyun.am)—Parliament speaker Alen Simonyan sparked uproar and faced calls to resign on Tuesday after a video emerged of him making disparaging comments about Armenian soldiers captured by Azerbaijan.

Simonyan was secretly filmed as he spoke with several members of France’s Armenian community during a recent visit to Paris.

A short video of the conversation first appeared on social media in the morning. Armenian media circulated a longer footage in the following hours.

Simonyan can be seen and heard saying that many of the Armenian prisoners of war (POWs) held in Azerbaijan “put down their weapons and ran away” during fighting with Azerbaijani forces. He claimed that their relatives have not protested lately because they realize that the soldiers are deserters.

“If I’m going to lose Syunik, Sisian because of those POWs … sorry, I may be wrong, but I believe those POWs don’t exist anymore,” Simonian said.

“We certainly are going to bring those guys back,” he went on. “That’s not up for discussion. But we can’t hold Armenia, Artsakh and all Armenians hostage [to POWs] … I can’t say this loudly.”

Simonyan, who is a key political ally of Prime Minister Nikol Pashinyan, essentially stood by his remarks when he spoke with journalists later on Tuesday.

“Unfortunately, there are soldiers and officers who did not perform their duty and were taken prisoner,” he said.

“All those people who broke the law and surrendered themselves instead of protecting Armenia’s borders will be held accountable,” added Simonyan.

The speaker appeared to have primarily referred to about three dozen Armenian soldiers taken prisoner during heavy fighting that broke out on the Armenian-Azerbaijani border on November 16. Azerbaijan freed ten of them at the weekend in exchange for more information about Armenian minefields around Karabakh.

Baku already held dozens of other Armenian POWs before the border clash that left 13 soldiers from both sides dead. The Armenian government regularly demanded their release and raised the matter with foreign powers and international organizations.

Siranush Sahakyan, a lawyer representing POWs in the European Court of Human Rights, criticized Simonian. She argued that Armenian military investigators have questioned all POWs repatriated since the November 2020 ceasefire in Karabakh and have not indicted any of them.

Simonyan was strongly condemned by the Armenian opposition and civil society members. Levon Barseghyan, a veteran civic activist based in Gyumri, accused him of violating the presumption of innocence and disrespecting the soldiers.

Anna Grigoryan, a lawmaker representing the main opposition Hayastan alliance, told reporters that it will try to have the Armenian parliament impeach and replace its speaker.

Grigoryan said the parliament’s pro-government majority must also condemn Simonian. She said failure to do so would amount to an endorsement of his controversial remarks.

Pashinyan said on November 18 that Armenian law-enforcement authorities must investigate “every case of captivity” and decide whether it warrants criminal charges against military personnel.

Baku Has Given Azerbaijani Names to Several Cities in Syunik