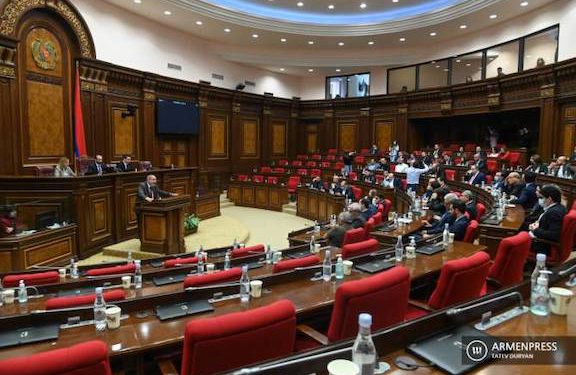 YEREVAN (Azatutyun.am)—The Armenian parliament voted to dissolve itself on Monday, paving the way for the conduct of fresh elections in late June.

Armenia’s constitution stipulates that such elections can be held only if the prime minister resigns and the parliament twice fails to elect a new head of the government within two weeks. Prime Minister Nikol Pashinyan and his cabinet formally stepped down for that purpose on April 25.

Deputies representing the parliament’s pro-government majority did not reelect him or install another premier when they first voted on May 3. They made sure that the second vote yields the same result.

This means that the National Assembly will be automatically dissolved. It will formally retain its legislative powers pending the election of a new parliament next month.

The two opposition parties represented in the outgoing legislature agreed to this scenario during talks with Pashinyan held earlier this spring.

Pashinyan first expressed readiness to hold early elections in December amid angry anti-government protests triggered by Armenia’s defeat in a six-week war with Azerbaijan. The Armenian opposition blamed him for the defeat and demanded that he hand over power to an interim government.

Pashinyan and his My Step bloc stated on February 7 that they see no need for snap polls because of what they called a lack of “public demand.” A coalition of opposition parties resumed street protests in Yerevan on February 20.

Five days later, the Armenian military’s top brass issued a statement accusing Pashinyan’s government of misrule and incompetence and demanding its resignation. The prime minister rejected the demand as a coup attempt. He went on to announce on March 18 that the snap polls will take place after all.