Pashinyan Accuses Aliyev of Plotting Genocide of Armenians in Artsakh 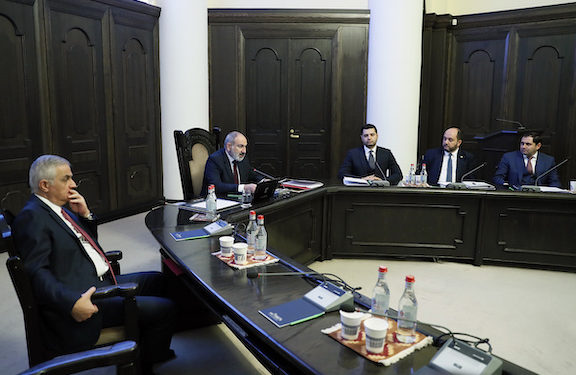 Prime Minister Nikol Pashinyan on Thursday accused President Ilham Aliyev of Azerbaijan of “preparing ground” for a genocide of Armenians in Artsakh—Nagorno-Karabakh and proposed the creation of a de-militarized zone, “guaranteed by the international community” along Artsakh’s border with Azerbaijan.

At the beginning of his weekly cabinet meeting, Pashinyan responded directly to accusations made by Aliyev on Tuesday in a threat-filled speech he made in Shushi, warning Armenia of calamitous military reprisals if it does not meet Baku’s demands.

Pashinyan said that Aliyev, through his actions and statement, “is not only threatening, but is already preparing a genocide of the Armenians of Nagorno-Karabakh.”

“If anyone thinks that our peace agenda means the ‘peaceful annihilation of Armenians in Armenia or Artsakh, they are gravely mistaken,” Pashinyan declared.

The prime minister cited several instances of Azerbaijan’s “chronic” violation of provisions of several agreements that he, Aliyev and President Vladimir Putin of Russia have signed that specifically address Nagorno-Karabakh and the rights and security of its population, specifically the November 9, 2020 statement, which he said mentions Nagorno-Karabakh “four times.”

Among the examples Pashinyan outlined was the illegal occupation of Artsakh Khtsaberd and Hin Tagher villages and its adjacent settlements in December 2020, as well as what he called the “Operation Parukh,” during which Azerbaijani forces breached the line of contact being guarded by Russian peacekeeping forces and entered the village of Parukh in Artsakh’s Askeran region in March of this year.

Pashinyan also said that Aliyev’s genocidal intentions were expressed when the Azerbaijani leader questioned “the terms of deployment of the Russian peacekeeping force in Nagorno-Karabakh, which in turn grossly violate at least three of the statements made in the trilateral format.”

He said that in two other statements adopted in Sochi on November 26, 2021 and October 31, 2022 Aliyev “himself acknowledged the vital, important contribution of the peacekeepers to ensuring the security and stability of its deployment zone. Furthermore, he [Aliyev] acknowledged the need for further work by the peacekeepers for the stability of the situation in the region.”

The prime minister went on to point out that Aliyev has worked against all decisions made during meetings with not only Russia, but also Western leaders, who through their mediation efforts, have advanced the imperative for security of the people of Artsakh and have declared the Karabakh conflict not resolved.

In his speech on Tuesday, Aliyev accused Armenia of still deploying Armenian armed forces in Artsakh.

“First of all, I want to state that the Republic of Armenia does not have an army in Nagorno Karabakh, and it was Azerbaijan that rejected the proposal to send an observer mission to Nagorno Karabakh to clarify this issue, which I made in Prague on October 6,” Pashinyan asserted.

He said that during the October 31 meeting with Aliyev and Putin in Sochi, he brought up a suggestion by the Artsakh authorities to create a de-militarized zone around Karabakh.

“It is proposed to create a demilitarized zone around Nagorno-Karabakh with international guarantees, as a result of which Nagorno-Karabakh may not need a defense army of that scale. This proposal is still valid, I think,” Pashinyan said, reiterating Armenia’s demands for Azerbaijani forces to withdraw from all occupied positions in Armenia and Artsakh.

At the onset of his remarks, Pashinyan, citing Aliyev’s speech on Tuesday, said that Azerbaijan’s authorities have “geopolitical ambitions” that continued to be a threat to the security and stability of the South Caucasus and the borer regions.

“That speech, which was full of unsubstantiated threats directed to the international community and toward Armenia, where the President of Azerbaijan accused Armenia and our government of not fulfilling the agreements and the commitments, is, in fact, the opposite,” said Pashinyan.

“Aliyev’s statements were made on the day after the meeting of the Foreign Ministers of Armenia and Azerbaijan in Washington hosted by the U.S. Secretary of State Antony Blinken and the discussions around a possible peace treaty, when the delegations of the sides had not even returned to their capitals,” Pashinyan pointed out.

The prime minister said that Aliyev’s “infamous” speech on Tuesday clearly violated the agreements made as recently as October 31 in Sochi and October 6 in Prague.

Contrary to the essence of those statements, Pashinyan said, “The Azerbaijani leader is speaking about his ambitions toward the sovereign territory of Armenia, with an obvious intention of terrorizing the civilian population and threatening them by naming a number of settlements,” Pashinyan added, making reference to Aliyev’s statement about the cities and towns that are at “eye’s view” of Azerbaijani forces, which have invaded various elevations and hills in Armenia.

Pashinyan’s remarks were the first official reaction by Yerevan to Aliyev’s speech on Tuesday.

A Brief History of Veterans Day