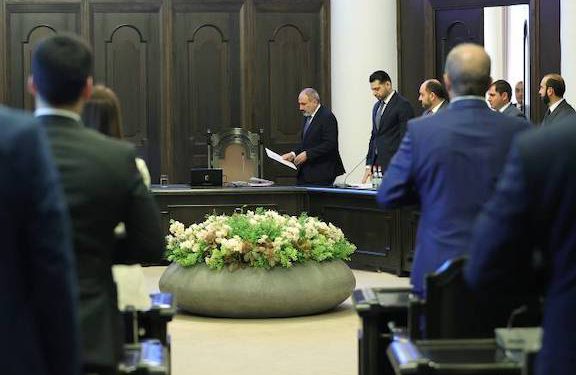 Prime Minister Nikol Pashinyan on Friday used his weekly cabinet meeting to discuss again the issue of Armenian being cornered by the international community to “lower the bar” on expectations for Artsakh’s status. In an apparent response to opposition forces, which accused him of “selling out” Artsakh, Pashinyan claimed that the bar on Artsakh’s status was lowered as far back as the 1990’s.

He explained that following the April 2016 War, the OSCE Minsk Group, through its proposals, sought to delay the discussion of the Karabakh status issue indefinitely.

“In the 2016 proposals, the proposal on delegating the Nagorno Karabakh status issue to international bodies was also a similar lowering of the bar, moreover the kind of bodies that had already previously expressed a position around the issue within the framework of Azerbaijan’s territorial integrity,” Pashinyan told his cabinet.

“Various documents adopted by various international bodies since the 1990s contained direct or indirect calls for lowering the bar. And the fact that the meaning of these facts were carefully hidden from our public doesn’t mean that they didn’t exist,” Pashinyan said in an apparent accusation of his predecessors.

He claimed that his government’s short-term and long-term objective is to ensure the creation of a situation—or solution—whereby the people of Artsakh continue living in Artsakh. He referenced his speech last week in parliament, which has angered not only opposition forces but also human rights activists in country, saying that he had spelled out then that he wanted the people of Artsakh to feel like “Artsakhtsis” and Armenian.

He said that any resolution to the Karabakh conflict or any development in Artsakh that did not ensure or guarantee his stated conditions would be “never be acceptable for us.”

Pashinyan said he “simply” rules out the signing of any document “without a broad public discussion that would include all segments of the public in Artsakh.”

“This is a guarantee—an ironclad guarantee—that the fate of Artsakh cannot be decided behind the back of the people,” Pashinyan said.

He rejected the criticism that has been directed at him for signing the November 9, 2020 agreement without public discourse saying that “in wartime a decision was to be made within hours and sometimes minutes to save thousands of Artsakhtsis, 25,000 troops and save Artsakh from exodus of Armenians.” He claimed that the current government approaches were aimed at ensuring that “we don’t have to make decisions under such conditions.”

Pashinyan said that after the November 2020 statement there has been no blueprint or draft of a settlement of the Karabakh conflict, and scoffed at insinuations that have been made ahead of every foreign trip he has made charging that he was going to surrender Artsakh to Armenia, calling those statements “fake news.”

“Forgive me but I have to say this,” Pashinyan said presumably addressing opposition concerns about the surrender of Artsakh. “Artsakh is not a thing. It is not an object for it to be surrendered or not surrendered.”

Gov. Newsom Proclaims Day of Remembrance of the Armenian Genocide