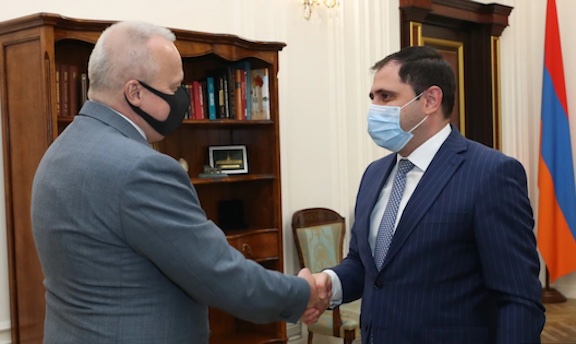 He made the announcement during a Facebook Live interview.

Erdogan, on Sunday, said that Pashinyan had asked his Georgian counterpart Irakli Gharibashvili to mediate a meeting with him. The Turkish leader said that Armenia must acknowledge Azerbaijan’s territorial integrity as a precondition for a meeting. This supposes Armenia’s recognition of Artsakh under Azerbaijani rule.

Papikyan on Thursday discussed with Sergei Kopyrkin, Russia’s ambassador in Yerevan, the continuing disruptions in Armenia’s trade with Iran caused by an Azerbaijani checkpoint set up on the main highway connecting the two neighboring countries.
Azerbaijani forces reportedly began escorting Armenian cars driving along the Azerbaijani-controlled stretch one week after Azerbaijani authorities set up the checkpoint on September 12 to stop and tax Iranian trucks. Many of the truck drivers have refused to pay hefty “road taxes.”

“We also discussed the situation at the Goris-Kapan highway section, emphasizing Russia’s important and constructive role in terms of reducing tensions and finding solutions to arising problems,” Papikyan wrote on his Facebook page about his meeting with Kopyrkin.

Moscow said last week that the crisis on the Goris-Kapan underscores the need to demarcate the Armenian-Azerbaijani border. Russia has reportedly submitted relevant proposals to Baku and Yerevan and is awaiting their responses.

“In the meantime, we will continue joint efforts to unblock transport and economic links in the region in line with the implementation of [Russian-Armenian-Azerbaijani] agreements reached at the highest level,” said Russian Foreign Ministry Spokesperson Maria Zakharova last week.