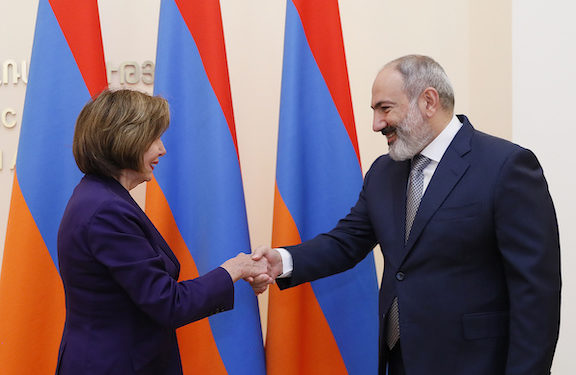 House Speaker Nancy Pelosi, who is leading a Congressional delegation to Armenia, on Sunday met with Prime Minister Nikol Pashinyan to discuss furthering relations between the United States and Armenia, as well as highlight the importance of security and stability in the region.

Pelosi, whose delegation includes representatives Frank Pallone, Jackie Speier and Anna Eshoo, strongly condemned what she called the “illegal attacks” by Azerbaijan on Armenia’s territory and emphasized the importance of democracy, sovereignty and security during a press conference earlier on Sunday.

Pashinyan and Pelosi also discussed the recent aggression by Azerbaijan against Armenia’s sovereign territory and issues relating to the withdrawal of the Azerbaijani units from Armenia’s territory. The possibilities of the unblocking of transportation infrastructure in the region, the settlement of the Nagorno Karabakh conflict were also touched upon.

In welcoming Pelosi to Armenia, Pashinyan underscored “the clear position of the United States” following Azerbaijan’s aggressive attack last week on Armenia’s sovereign territory. Referring to the United States Security Council session focusing on the large-scale attacks, Pashinyan said that Yerevan is looking to the U.S. to keep the matter of Armenia’s sovereignty on the Security Council’s agenda.

“We see the readiness of the US government to support the democratic agenda in our country. I want to express our dedication to the agenda of democratic reforms, despite the fact that, as you see, it’s not an easy path,” Pashinyan told Pelosi and the delegation.

“The support to democracy in Armenia, the resolution on the recognition of the Armenian Genocide, the counteraction to Turkey over Nagorno Karabakh, and in all other terms we are the friend of Armenia. We are here by respecting your government,” Pelosi told Pashinyan.

“The thing is that when we travel to any country, it has a purpose of showing respect, listening and learning, but I can say frankly that this delegation which came from the United States to Armenia has brought with it the love and the respect of the American people to your government and the love to the people of Armenia,” added Pelosi.

The Speaker of the House assured that the U.S. will continue actively contributing to the programs aimed at further expanding “the bilateral multisectoral mutual partnership and developing democracy in Armenia,” according to Pashinyan’s press office.

Pelosi and her delegation visited the Dizidernagapert Armenian Genocide Memorial Complex, where Pelosi was awarded Armenia’s “Order of Honor.”

She also gave a speech at the Cafesjian Center for the Arts, in an event organized by the U.S. Embassy in Armenia, where she reiterated the U.S.’s support to protecting Armenia’s security and sovereignty.

Pelosi also touched the House passage of the Armenian Genocide resolution in 2019 and the eventual recognition by President Joe Biden in 2021. She praised her colleague and the author of the resolution, Rep. Adam Schiff for his tireless efforts in advocating for Armenian issues in Congress.