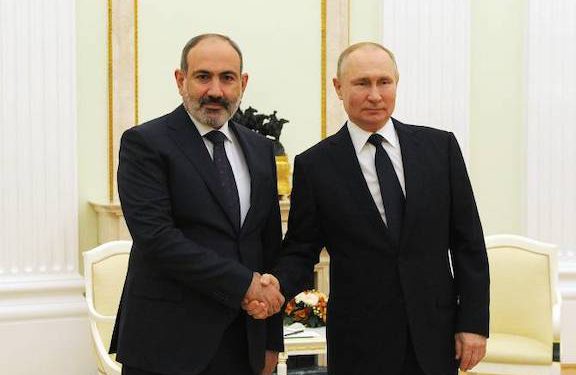 Acting prime minister Nikol Pashinyan on Thursday pressed Russia’s President Vladimir Putin on Armenia’s security, as tensions continued to mount at the Yeraskh border region, where Azerbaijani forces have been indiscriminately shelling for the past week.

The discussion took place Thursday via phone, a week after Pashinyan was hosted at the Kremlin by Putin and a few days after the Russian leader met with Azerbaijan’s president Ilham Aliyev.

Pashinyan’s press office issued a generic readout of the call, saying that bi-lateral “issues of interest” were discussed.

“The sides discussed the implementation of the agreements reached within the framework of the trilateral declarations of November 9, 2020 and January 11, 2021, in particular, the issue of the return of war prisoners – the reopening of regional roads,” said Pashinyan’s office.

Pashinyan reportedly stressed the key role Russia can play in maintaining peace and stability, while emphasizing the importance of the OSCE Minsk Group Co-Chairs efforts.

Also on Thursday, Russia voiced concern over the escalation of tensions between Armenia and Azerbaijan, especially at the shared border.

Russia’s Foreign Ministry spokesperson Maria Zakharova said that the border standoff “has an extremely negative impact on the regional situation and does not contribute to the resumption of the dialogue between Armenia and Azerbaijan, causing unjustified losses among the populations of both countries.”

“Russia hopes that talks on the demarcation of the Armenian-Azerbaijani border will start soon,” Zakharova said, adding that the Russia is ready to assist in this matter.