Pashinyan, Putin and Aliyev to Meet in Sochi on Friday 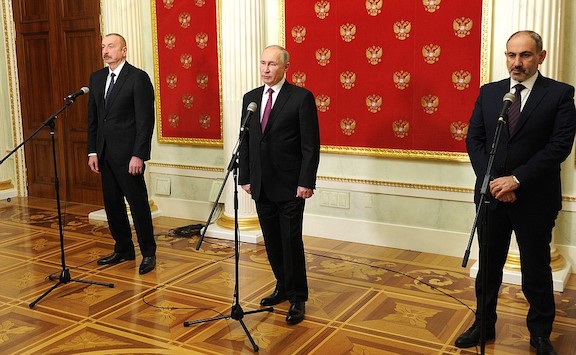 The Kremlin announced on Tuesday that the leaders of Armenia, Russia and Azerbaijan will hold talks in the Russian resort town of Sochi on Friday.

It is expected that Prime Minister Nikol Pashinyan and the presidents of Russia and Turkey, Vladmir Putin and Ilham Aliyev will outline further steps to strengthen the stability in the region and discuss issues relating to Artsakh.

Both Pashinyan and Aliyev confirmed their attendance at Friday’s meeting in Sochi, where Putin is scheduled to meet separately with the two leaders, according to the Kremlin.

The Kremlin’s announcement comes after the President of the European Council Charles Michel announced last week that Pashinyan and Aliyev will meet in Brussels on December 15 on the margins of the EU Eastern Partnerships summit.

The Kremlin’s spokesperson Demitry Peskov had announced earlier that a meeting between the three leaders would take place on November 9, with reports suggesting that the meeting would be virtual. November 9 marked the one-year anniversary of the signing of a document that ended last year’s military actions in Artsakh, but stipulated the surrender of significant territory in Armenia and Artsakh to Azerbaijan.

Several media outlets, quoting sources in Moscow, as well as the Russian RIA Novosti news agency reported that the November 9 meeting would include the signing of an agreement between the three leaders that would cement Armenia surrendering territories in Armenia. Such a meeting never took place.

During a virtual press conference on Tuesday, Pashinyan explained that Armenia was ready for the November 9 online meeting, “if that meeting would resolve a specific issue, such the return of POWs.” Pashinyan told reporters that he expressed that the date—November 9—is “a hard day” for Armenians.

He also explained that since there was not consensus on the meeting agenda he had proposed a meeting on November 15, however there were proposals for a November 26 date. Pashinyan said that during discussions of a meeting it was suggested that the talks be held in person, instead of the online format that was planned.

Pashinyan emphasized that plans for such a meeting were underway for a long time, and reiterated Armenia’s readiness to negotiate for mutually acceptable solutions to the current situation. However, he blamed Azerbaijan for undermining the process.

“But sometimes, through symbolic efforts or other means, Azerbaijan has pursued a policy of aggressive coercion and blackmail against Armenia,” Pashinyan told reporters.

“As I said at the latest meeting of the Security Council that Armenia will not give in to this policy of blackmail, no matter how much we understand the vulnerability of our situation, because Azerbaijan, with the encouragement of other countries, already is targeting Armenia’s independence, sovereignty, statehood and democracy. And I said that one should not speak to Armenia in the language of coercion,” Pashinyan stated.

On November 16, Azerbaijani forces attempted yet another incursion into Armenia’s sovereign territory. During the military action, which ended through a Russian mediated ceasefire agreement, six Armenian soldiers were killed, with 13 others being taken hostage. The fate of 24 soldiers, who have been declared missing in action, still is unknown.

Pashinyan told reporters Tuesday that based on unverified reports, the 24 soldiers who have been reported missing, have, in fact, been captured by Azerbaijan.

“There are also reports that there are wounded among the captives, at least one of them was injured. In other words, he was captured in a situation where he could not resist. Naturally, we are working hard for the return of all of them,” added Pashinyan.

As for the Brussels summit set for December 15, a senior EU official, speaking on condition of anonymity, told RFE/RL that the goal is “to bring Pashinian and Aliyev to the same table for confidence-building measures.”

“It is not clear yet how their Brussels meetings will look like, who of the EU leaders will sit, whether the defense ministers or foreign ministers of Armenia and Azerbaijan will be present,” the EU official told RFE/RL over the weekend.

Pashinyan said on Tuesday during the virtual press conference that humanitarian issues will be discussed during the Brussels summit, including the return of Armenian prisoners of war.

“The important nuance is that we will try not to mix the agendas discussed in different formats. I think, yes, one of the issues to be discussed in Brussels will be humanitarian issues, including the issue of POWs. And within the framework of the EU’s Eastern Partnership, issues of our relations will be discussed. There will also be a general contextual discussion. And I do not think it is good to form expectations from any specific meeting, either negative or positive, one should not expect such rapid results,” Pashinyan explained, adding that negotiations are always welcome by Yerevan.