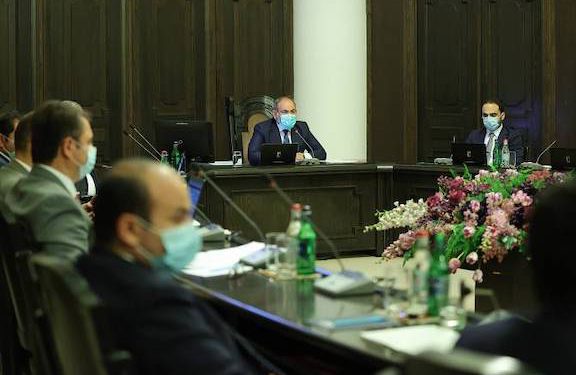 He said Armenia will use its military alliance with Russia to neutralize such threats.

Speaking on Wednesday, Aliyev complained that Yerevan is reluctant to sign a “peace treaty” with Baku eight months after a Russian-brokered ceasefire stopped the war in Karabakh. He said such a treaty must commit the two sides to recognizing each other’s territorial integrity.

This would presumably mean a formal Armenian recognition of Azerbaijani sovereignty over Karabakh.

“The Armenians must think carefully about that because it could be too late for them in the future,” said Aliyev.

In that context, he again referred to much of Armenia’s territory, including the capital Yerevan, as “historical Azerbaijani lands” and said Azerbaijanis will eventually “return to their ancestral lands.”

Pashinyan hit back at Aliyev as he opened a weekly meeting of his cabinet in Yerevan. He said Baku is hampering regional peace and stability with “statements threatening Armenia’s sovereignty and territorial integrity.”

“Armenia will defend its sovereignty and territorial integrity by all possible and impossible means, including the mechanisms of the joint Russian-Armenian military contingent and the Collective Security Treaty Organization, something about which we have been holding consultations with our partners,” he said.

Pashinyan also pointed to Aliyev’s repeated threats to forcibly open a “corridor” connecting Azerbaijan to its Nakhichevan exclave via Armenia’s Syunik province. He said they run counter to the terms of the truce agreement brokered by Russian President Vladimir Putin on November 9.

The agreement commits Yerevan to opening rail and road links between Nakhichevan and the rest of Azerbaijan. Armenia should be able, for its part, to use Azerbaijani territory as a transit route for cargo shipments to and from Russia and Iran.

At a January meeting in Moscow, Putin, Aliyev and Pashinyan agreed to set up a trilateral working group tasked with working out practical modalities of reopening the transport links. The group co-headed by deputy prime ministers of the three states held several meetings in the following months.

Pashinyan claimed that Aliyev’s threats are aimed at disrupting the group’s “quite constructive and productive activities.”

Citing statements made by the U.S., Russian and French mediators co-heading the OSCE Minsk Group, he further disputed Aliyev’s fresh claim that Azerbaijani “unilaterally” resolved the Karabakh conflict with its victory in the six-week war. He made clear that Yerevan will continue to pursue “the realization of the Karabakh people’s right to self-determination.”