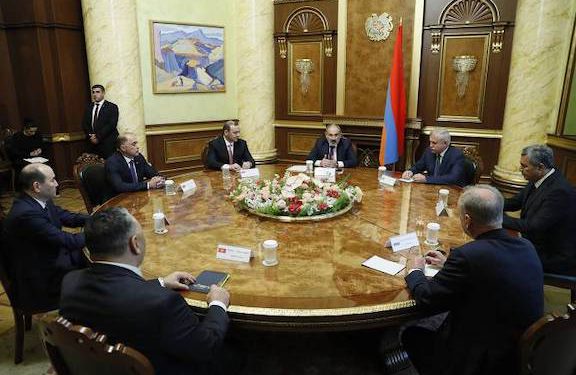 Prime Minister Nikol Pashinyan told a gathering of national security advisers of CSTO member-states that continued aggressive statements from Azerbaijan should serve as a warning sign for the Russia-led security organization as it is a “fundamental issue” both for Armenia and the organization.

The national security advisers of Collective Security Treaty Organization’s member-states were meeting in Yerevan as part of a week-long convergence of CSTO leaders in Armenia for meetings on various governmental levels.

On the heels of another military threat from President Ilham Aliyev of Azerbaijan on Thursday, Pashinyan told the gathering that in light of continued “aggressive statements” from Baku, the CSTO should consider dispatching a monitoring mission to the border.

When Azerbaijani forces breached Armenia’s sovereign border in May, 2021, and advance onto the provinces on Gegharkunik and Syunik, Armenia appealed to the CSTO for immediate assistance, but was rebuffed, receiving a response two month later urging Yerevan to negotiate with Baku. Yet in January, Yerevan not only heeded an appeal but also sent troops to Kazakhstan when protests demanding the government’s resignation turned violent.

When Armenia appealed to the CSTO in May 2021, some member-states said that the area was heavily militarized and not demarcated.

Pashinyan on Friday told the CSTO representatives that the attitude shown toward Armenia last year was “dangerous.”

“Our position is that there is a concrete border between Armenia and Azerbaijan, because in 1991, when the Commonwealth of Independent States was established, an interstate agreement was signed, which clearly states that the countries mutually recognize each other’s existing borders.  This refers to the administrative boundaries of the Soviet period, and I think we should have this as a starting point. The opposite interpretation of this situation, I think, will reduce the effectiveness of the CSTO,” said Pashinyan.

As the holder of the CSTO’s rotating presidency, Pashinyan urged the members of the group to have an earnest discussion about the matter.

“Why?” Pashinyan asked. “Because we see that aggressive statements by Azerbaijan are continuing. We should discuss this issue, especially considering that Armenia has applied to the CSTO, as it is a very fundamental issue for both us and the Organization.”

In his presentation at the CSTO gathering on Friday, Armenia’s National Security Chief Armen Grigoyan rejected such a “corridor,” saying that the agreements signed by the leaders of Armenia, Azerbaijan and Russia merely call for the opening of transport links between Armenia and Azerbaijan.

Grigoryan held a separate meeting with his Russian counterpart, Nikolay Patrushev, late on Thursday. After the meeting Grigoryan’s office reported that Patrushev said “Moscow supports Armenia in the processes of ensuring regional security.”