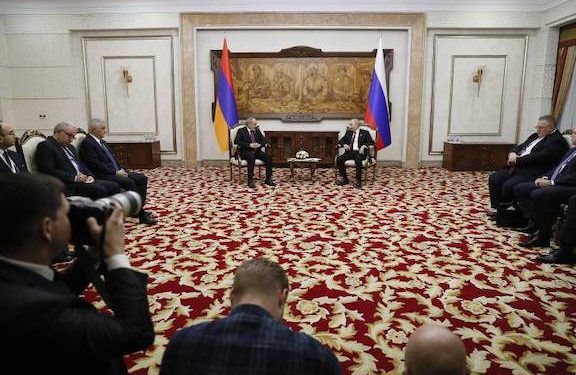 Prime Minister Nikol Pashinyan told President Vladimir Putin of Russia on Friday during a meeting in the Kyrgyzstan’s capital, Bishkek, that continued and heightened tensions in Nagorno-Karabakh remain critical issues in the region.

“Unfortunately, the situation in our region remains tense, and I want to note that the main issue in our region, of course, continues to be the settlement of Nagorno-Karabakh issue,” Pashinyan told Putin when they met on the margins of the Eurasian Economic Council.

“Recently we also witnessed an increase in tensions in the area of responsibility of Russian peacekeepers in Nagorno-Karabakh. I’m sure you have been informed that the Lachin Corridor was recently closed, and there are very big fears in Nagorno-Karabakh about that,” Pashinyan said ahead of his meeting with Putin.

Pashinyan was referring to last Saturday’s closure of the Lachin corridor—the main road connecting Armenia to Artsakh—where a group of Azerbaijanis dressed in civilian clothes blocked the road preventing cars from entering or exiting Artsakh. Later, Baku said that those individuals were investigating the alleged transport of illegal environmental cargo on that route.

When welcoming the Armenian leader ahead of the meeting, Putin thanked Pashinyan for hosting the CSTO summit in Yerevan in late November and pointed out that Russia remains Armenia’s main trade partner.

“Once again, I want to draw attention to the fact that Russia continues to be a leading trade and economic partner. More than 30 percent of Armenia’s trade turnover is with Russia, one of the leading investors, maybe even the main investor, with about 40 percent of investments. In the first ten months of this year, the growth of the trade turnover is 67 percent. This is a very serious, good, positive indicator,” Putin said ahead of his meeting with Pashinyan.

Meanwhile in Moscow, the Armenian and Russian defense ministers, Suren Papikyan and Sergei Shoigu, met and signed a new defense cooperation agreement between the two countries.

“Armenia is our ally within the CSTO and our key strategic partner in the South Caucasus. We are highly interested in maintaining stability in the region and are making all efforts to that end. We are attaching special importance to the development of bilateral cooperation and providing support to elevate the capabilities of the Armenia’s Armed Forces,” Shoigu said.

“We highly appreciate your initiative and efforts for organizing the summit. December is the right time to sum up the results and discuss future programs. Today we will sign the 2023 plan,” Papikyan said.

UPDATED: Standoff at Lachin Corridor as Azerbaijanis Again Block Only Road Between Armenia-Artsakh