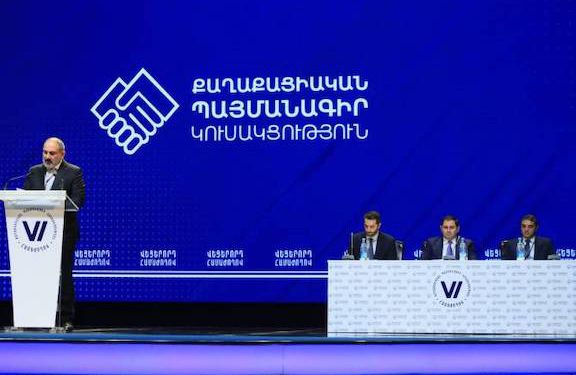 In a new platform adopted on Saturday, Prime Minister Nikol Pashinyan’s Civil Contract Party de facto abandoned the more than three decade-long effort to protect and secure Artsakh’s right to self-determination and independence, instead opting to work toward the lofty agenda of “peace.”

Civil Contract board member and vice-speaker of the Armenian parliament Ruben Rubinyan told the party congress on Saturday that the 2020 war has exacerbated Armenia’s security and has lefty it vulnerable. This, he said, couple with the fact that Azerbaijan and Turkey continue to pose a security threat for Armenia, the party has adopted what it calls a “new vision” for the settlement of the Karabakh conflict.

“That system must guarantee that Armenians of Nagorno Karabakh live in their homeland, consider themselves Armenians—Karabakhtis, Artsakhtis. The implementation of any settlement program is impossible to be imagined without the respective involvement of Nagorno-Karabakh,” Rubinyan added.

He based his argument on the notion that the threats from Azerbaijan and Turkey “must be managed.”

“We are convinced that the method of ensuring security for Armenia and Nagorno Karabakh is the advancing the notion of coexistence—a formula whereby each other’s existence with all the countries in the region is not ruled out—first of all our direct neighbors Turkey, Azerbaijan, Iran and Georgia,” Rubinyan explained.

Rubinyan, who is also Armenia’s special envoy in the negotiations with Ankara to normalize relations with Turkey announced a set of three priorities for the Civil Contract party from 2021 to 2026. He said the establishment of comprehensive and lasting peace, the development of high-quality and accessible education system and building a professional and combat-ready military would be the party’s main goals.

“Peace, modern education and a combat-ready professional army are the key factors for the protection of Armenia’s sovereignty, security and territorial integrity,” Rubinyan said before the party congress approved it as its platform.

The Civil Contract party holds an absolute majority in parliament. With the opposition forces boycotting the legislative session, lawmakers loyal to Pashinyan can easily adopt this platform as the country’s guiding agenda.

In his remarks to the party congress, Pashinyan said circumstances had forced Armenia to essentially abandon Artsakh and any notion of settling the Karabakh conflict.

He again blamed his predecessors for allowing Karabakh’s independence in 1991 and later, in 2007, for accepting the Madrid Principles as a basis for negotiations, faulting the ruling forces at the time of destroying “the legal grounds of Nagorno Karabakh’s declaration of independence.”

Pashinyan said that Armenia is at a juncture not that it has to protect its own statehood, sovereignty and independence.

“After I was elected prime minister, my initial efforts were aimed at the restoration of Nagorno-Karabakh’s status as a negotiator. It turned out, however, that all the scenarios were already out of Armenia’s control, because as a result of 30 years of negotiations Armenia lost all control in relations to the Nagorno-Karabakh issue,” Pashinyan rationalized.

“It turned out that Armenia doesn’t decide anything in that regard anymore, and the only thing it can decide is to obediently fulfill the decisions made elsewhere,” Pashinyan said. He said his administration’s mistake was “not obeying those decisions.”