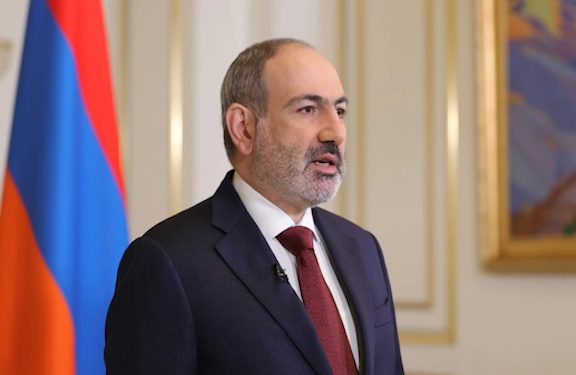 YEREVAN (Azatutyun.am)–Prime Minister Nikol Pashinyan formally announced on Sunday that he is resigning to pave the way for snap general elections aimed at ending the post-war political crisis in Armenia.

“In order to implement the decision to hold pre-term parliamentary elections on June 20, today I am resigning as prime minister of the Republic of Armenia,” he said in a televised address to the nation.

Under the Armenian constitution, fresh elections can be held only if the prime minister resigns and the parliament twice fails to elect another head of the government. The current National Assembly is controlled by Pashinyan’s political allies.

“The parliamentary majority will not elect a prime minister, the National Assembly will be deemed dissolved, and pre-term parliamentary elections will be called,” said Pashinyan. “During this [pre-election] period, I will continue to perform the prime minister’s duties on a full scale envisaged by Armenia’s constitution and laws.”

The prime minister, who swept to power in a 2018 “velvet revolution,” reaffirmed that he and his political team will seek reelection in the upcoming polls.

Pashinyan first expressed readiness to hold early elections in December amid angry anti-government protests triggered by Armenia’s defeat in a six-week war with Azerbaijan stopped by a Russian-brokered ceasefire on November 10. A coalition of opposition forces blamed him for the defeat and demanded that he hand over power to an interim government.

Pashinyan and his My Step bloc stated on February 7 that they see no need for fresh elections because of what they called a lack of “public demand.” The opposition alliance, called the Homeland Salvation Movement, resumed its street protests on February 20.

Five days later, the Armenian military’s top brass issued a statement accusing Pashinyan’s government of misrule and incompetence and demanding its resignation. The prime minister rejected the demand as a coup attempt.

Pashinyan went on to announce on March 18 that the snap polls will take place after all. The move followed his talks held with the leaders of the two opposition parties represented in the current parliament. They are understood to have assured him that their parties will not nominate prime-ministerial candidates in the event of his tactical resignation.

Several other major opposition groups and figures, including former President Robert Kocharian, have also expressed their intention to enter the parliamentary race.