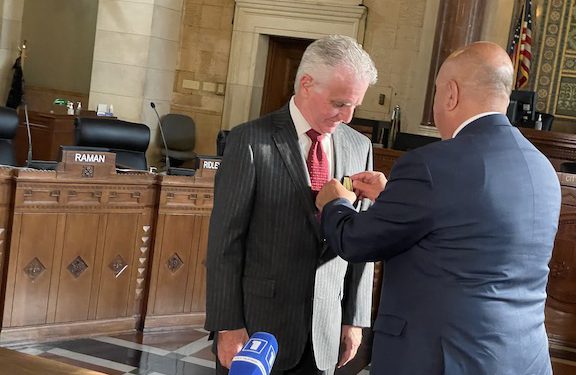 Los Angeles City Councilmember Paul Krekorian on Monday was awarded Armenia’s Gratitude medal in recognition of his myriad efforts as an elected official to support, strengthen and advance Armenia and Artsakh.

The medal was presented to Krekorian by Armenia’s Consul General to Los Angeles Ambassador Armen Baibourtian at a ceremony held at the Los Angeles City Hall council chambers.

In his remarks, Baibourtian said Krekorian’s continued support for Armenia and Artsakh unifies the Armenian community of California.

Baibourtian also recounted that within the first days of last fall’s Artsakh War, Krekorian began to unite and consolidate California’s state, local and federal officials in pursuit of ending the war unleashed by Azerbaijan against Artsakh. As a result, and thanks to his efforts, Baibourtian said, on October 5, members of Congress and California lawmakers joined Los Angeles City Council members and leaders and other officials at a joint press conference that raised awareness about and condemned Azerbaijan’s aggression against Artsakh.

During the 44-day war and in its aftermath, Baibourtian said, thanks to Krekorian, the L.A. City Council unanimously adopted a resolution confirming the support of the City of Los Angeles to the people of the Republic of Artsakh. At Krekorian’s initiative, the Los Angeles City Council unanimously adopted yet another resolution, in which it demanded Azerbaijan to immediately release all Armenian prisoners of war and captured civilians. Furthermore, Baibourtian explained, November 9th was declared as a Day of Remembrance and Commemoration of the victims of Azerbaijan’s aggression against Artsakh.

Baibourtian commended Krekorian for encouraging the LA City Council to suspend the LA-Shushi Friendship City Agreement until such time when Shushi emerges from Azerbaijani occupation.

The Consul General then pinned the Gratitude medal on Krekorian and, once again, thanked him for his service.

A visibly moved Kerkorian said that his response to the kind words of commendation and encouragement expressed today would be very brief: “I was just doing my job. We should always be with our Homeland and cherish it.”

“Regardless of what temporary trials and tribulations Armenia may face, the City of Los Angeles will always stand in solidarity with Armenia and Artsakh,” said Krekorian.

He also discussed the importance of involvement in the American political process, recounting his first campaign in 2000, when young Armenian-Americans came together and registered thousands of Armenians to vote and empowered the community to become active in elections.

Krekorian was surrounded by his wife, Tamar, and children, Andrew and Lori.