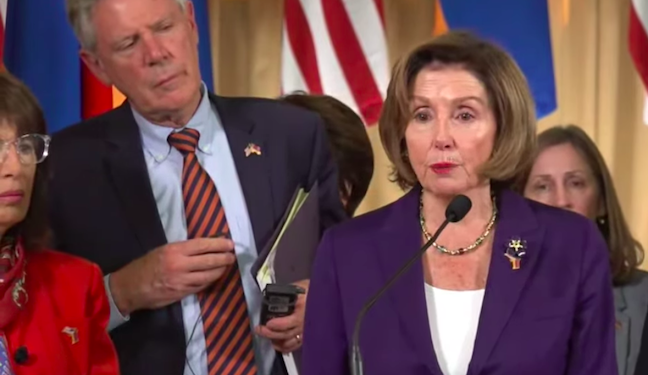 House Speaker Nancy Pelosi during a press conference in Yerevan on Sept. 18

Pelosi was referring to the recent aggression launched last week by Azerbaijan, when shortly after midnight on September 13 Azerbaijan forces launched an attack on Armenia’s Gegharkunik, Syunik and Vayots Dzor provinces. As a result of these military actions, 135 soldiers have been killed, dozens injured and more than 7,000 people have been displaced from their homes, according to official estimates.

Pelosi explained that while the trip to Armenia was planned in advance of last week’s attack by Azerbaijan, the delegation she is leading with representatives Frank Pallone, Jackie Speier and Anna Eshoo, has been closely monitoring the events.

“The United States, which is an OSCE Minsk Group co-chair, has made it clear that there can no military solution to the conflict. We continue to watch the situation closely and we continue to support a negotiated and sustainable settlement to all issues related to the Nagorno-Karabakh conflict,” added Pelosi.

The House Speaker said that during her meeting with Simonyan she explained that, in Members of Congress, for decades through a bi-partisan efforts, have tried to “hold Turkey, as well as Azerbaijan, responsible for the conflict.”

Speire, a co-chair of the Armenian Congressional Caucus, said that the House of Representatives has already introduced a resolution condemning the actions of Azerbaijan.

“The House of Representatives has already introduced a resolution, the co-authors of which are all of us, where we say that we condemn the actions by Azerbaijan. I am hopeful we will take that resolution up soon. As to our commitment to Armenia, we will continue to support the integrity, the democracy of Armenia, and the borders, and we will resist any effort to those borders changed,” Speier said during the press conference.

Pelosi added that the immediate response from the United States was to stop the violence and establish a ceasefire.

“Our delegation had been very outspoken saying that this was initiated by the Azeris, and that there has to be recognition of that,” Pelosi said.

Pelosi’s remarks focused mainly on the importance of democracy and security. She said that the strides Armenia has made in advancing democracy is a “value” for the U.S.

“The territorial security, sovereignty and democracy of Armenia are a value to us in America,” Pelosi said.

A question was posed about whether the United States expects Armenia to leave the CSTO, and whether the American government is to guarantee the security of Armenia’s sovereign territory and borders

“We understand that Armenia is part of this security arrangement with Russia. We are not suggesting anything about that. What we are saying is that the United States is very concerned about Armenia’s security. We want to do whatever we can to be more supportive of Armenia’s security,” Pallone told the press conference.

Praising Armenia’s Democracy as “a joy to the world,” Pelosi said Armenia is a “good example to the transition to democracy. And we support that.”

“As Mr. Pallone said, your inter-relations with other entities is up to Armenia to decide. But from my standpoint, territorial security and sovereignty of Armenia, democracy of Armenia is a value to us in America. And in our relationships with other countries, we should be using our influence, our leverage showing that Armenian democracy and sovereignty is a priority,” she said.

“It is important to note that they got fact finders and not protection,” Pelosi added, referring to a CSTO fact-finding mission, whose leader unequivocally rejected peacekeeping initiative in Armenia after Azerbaijan’s attack, creating doubts among Armenian government officials about the viability of the security organization, of which Armenia is a member.

“One particular thing that is more related to economy than to security, except that they’re all related, is that the Speaker [Simonyan] asked us to support Armenia’s steps that it has been taking to be part of the Millennium Challenge, and that is a very big initiative for economic growth and fairness. We did commit that we would work to help with that,” Pelosi said.

Pelosi evaded an answer, simply saying that her delegation is there to listen.

A major snafu at the press conference was that the Armenian Parliament’s simultaneous translation mechanisms stopped working after opening remarks were made by Simonyan and Pelosi. This created for awkward moments, when the translator assigned the task was unable to fully provide the gist of the response and comments from the visiting delegation.