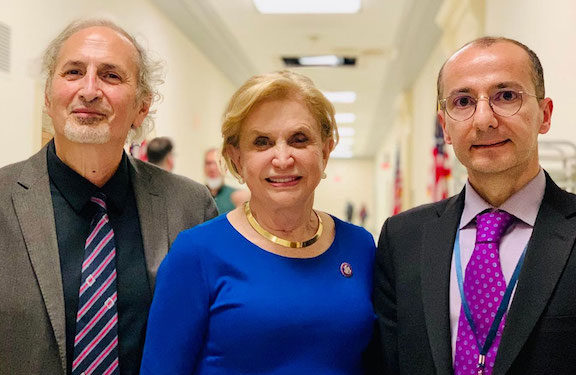 WASHINGTON, D.C.—Pulitzer Prize winning writer Peter Balakian and U.S. Commission on International Religious Freedom Chair Nadine Maenza joined this week with Members of Congress on Capitol Hill in commemorating the Armenian Genocide, the first such in-person gathering since the U.S. Congress and President fully and formally recognized this crime.

In eloquent remarks, Balakian expressed gratitude to Congressional leaders and President Biden for recognizing the Armenian Genocide, while forcefully challenging Turkey’s denials and obstruction of justice for this crime. “More than 30 nations have passed Armenian Genocide resolutions in Europe, in the Middle East, South America, and North America as statements of moral redress to Turkey for its failure to face its genocidal crimes,” stated Balakian. “Think of Germany’s restitutions and reparations for Israel and the Jewish people as the high moral ground. Reparations and restitution are always a necessity, as it is now in the Armenian case.”

Balakian argued that Genocide recognition is also important in understanding our contemporary world. “The Turkish extermination marks the first time a modern government used its bureaucracy, parliament, advanced technology and communications, organized killing squads and extreme nativist ideology – Pan-Turkism – to target and destroy an ethnic group in a concentrated period of time,” explained Balakian. “We can learn from the Armenian case a good deal about what the Nazi regime did to the Jews and Roma of Europe; what Pol Pot did in Cambodia; what the Hutu did to the Tutsi in Rwanda; and, the fates of Bosnian Muslims, Rohingya, Uighurs and other ethnic groups in our time, who are being subjected to the same.”

“As USCIRF said then, this step finally and firmly placed the United States on the right side of this terrible tragedy,” stated Maenza crediting the Armenian American community for its steadfast pursuit of recognition and justice. “As we reflect on this genocide of the past, let’s not forget the places where genocide is happening right now and other crimes against humanity. Let us renew our commitment to always stand together and stand against acts of hatred and intolerance wherever they may occur,” she concluded.

“Our community and coalition partners were honored to have Peter Balakian and Nadine Maenza at our first Congressional observance since the United States officially recognized the Armenian Genocide, and – of course – are gratified by the growing support for the Armenian Genocide Education Act,” said ANCA Executive Director Aram Hamparian. “We look forward to working with legislators from across the aisle to see this bipartisan measure – introduced by Representatives Maloney and Bilirakis and supported from the podium by so many of the speakers at this year’s Capitol Hill remembrance – enacted into law.”