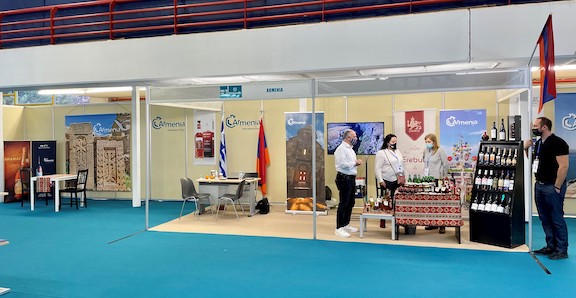 Armenia’s booth at the 2021 Philoxenia International Tourism Exhibition drew hundreds of visitors, who had the opportunity to learn more about Armenian culture. The exhibition took place in Thessaloniki from November 12 to 14, while following the proper Covid-19 protocols.

Visitors received information about the country, hotel accommodations, religious sites of interest, gastronomy, as well as Armenian wines, spirits, and beverages. A wide range of travel agents and tour operators from several countries including Greece, Switzerland, India, Brazil, Portugal, Italy, Ukraine, Latvia, Russia, Lebanon, Bulgaria, Romania, Albania, and even Turkey had already prearranged dozens of physical meetings with the Chamber’s executives in the framework of the Philoxenia Hosted Buyers Program.

A number of local officials, among whom were the General and Honorary Consuls of several countries, as well as members of the Parliament, local governors, and mayors, paid a visit to the biggest stand that Armenia has ever had at any fair held in Greece.

Armenia’s participation was organized by the Hellenic-Armenian Chamber of Commerce and Industry of Greece, which consistently contributes to the promotion of all touristic destinations in Armenia. The event was held under the auspices of the Embassy of Armenia to the Hellenic Republic.