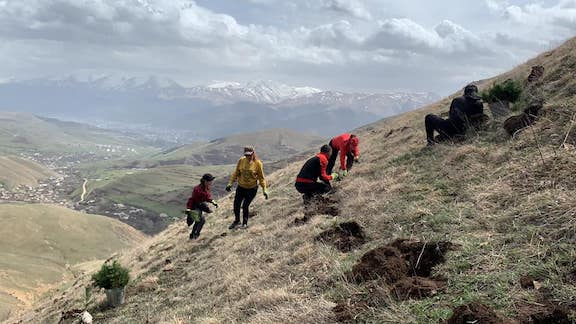 With many villagers unable to travel abroad for work due to the pandemic and socio-economic issues brought on by the recent war, the temporary work opportunities created by ATP are critical in creating economic opportunity in rural Armenia. Most recently, the Aznvadzor community in the Lori region became the focal point of ATP’s job stimulation.

Situated in the northern Lori region, Aznvazdzor Village was an Azerbaijani settlement up until the outbreak of the Nagorno-Karabakh conflict in 1989. The village is located on the southern slopes of Bazum ridge,  4km from the city of Vanadzor. It occupies an area of 14.56 sq. km and has a population of about 300.

Spring planting in Aznvadzor began on Monday, April 19th, and lasted for two weeks. Over 85,000 trees were planted across one acre. Tree types include pine, wild apple, oak, and beech. A fence was also installed to help protect the newly planted trees. The long-term impact is that the planted forest will contribute to biodiversity, soil and water conservation, and carbon sequestration. Most significantly, 60 villagers were hired to assist in the plantings.

Many of the newcomers to Aznvadzor first settled in the 1990s, and were Armenian refugees from Azerbaijan, mainly from Baku, Ganja, Sumgait, etc. The main occupation of the villagers is animal farming and horticulture. However, some have left traditional agricultural occupations to work in Armenia’s booming tourism industry. Still, the majority of the villagers engage in farming or leave for Russia for seasonal jobs.

“After we left Talish we stayed in Alashan, the real name of which is Qmqadzor. From there we went to Berdzor and to Bertadzor after that. In the end, our fate brought us to Aznvadzor, Lori, which we had never heard of. How many dzor’s (gorges) do we have to enter and exit before we can have a stable future?” said ATP seasonal worker, Ashot Bayunts.

The lack of employment in the village forces the male population to migrate abroad for work, mainly to Russia and other post-Soviet countries. When provided with seasonal jobs, many of the villagers prefer to stay with their families and work in the village. The amount earned and saved abroad is not significant when all the expenses are taken into account – accommodation, obtaining visas, travel fees, etc. Therefore, the seasonal opportunities created by ATP are critical in ensuring that the population remains in Aznvadzor, with their family and near their homes.

The selection of the new forestry planting site in Aznvadzor village was carefully planned by ATP specialists, taking into consideration several important factors including providing job opportunities to these villagers, as well as the optimal climate conditions. The main purpose of forest rehabilitation here is to restore the capacity of degraded forest land due to illegal and uncontrolled logging that was done during the 1990s.

The planting site, which encompasses a territory of about one acre, is situated on a slope of a hill about a kilometer away from Aznvadzor. Prior to the first plantings. the entire territory was fenced. The first tree planting was implemented in fall 2020 during which around 100,000 trees were planted, including fruit trees, decorative trees and shrubs. 85,000 trees were planted during the second tree planting, which was just completed.

Though ATP’s planting in Aznvadzor was completed, their work is not finished. Just last week, ATP planted 35,000 trees in Koghes village in Lori, and hired 33 locals. ATP will continue to create job opportunities and stimulate economic growth in rural Armenia through future planting projects, including the upcoming willow-tree planting project, through which another 300 workers will be hired.

Through a generous, anonymous donor, a match opportunity was created for $10,000 to assist in hiring the seasonal workers for planting in Aznvadzor. Though the match has been reached for that project, ATP’s upcoming projects still need financial support to help continue hiring seasonal workers. If you’d like to contribute, please donate through ATP’s website.

Armenia Tree Project, established in 1994, is a non-profit organization that revitalizes Armenia’s and Artsakh’s most vulnerable communities through tree-planting initiatives, and provides socio-economic support and growth. It is based in Yerevan, Armenia and has an office in Woburn, Massachusetts. For more information, please visit the website.