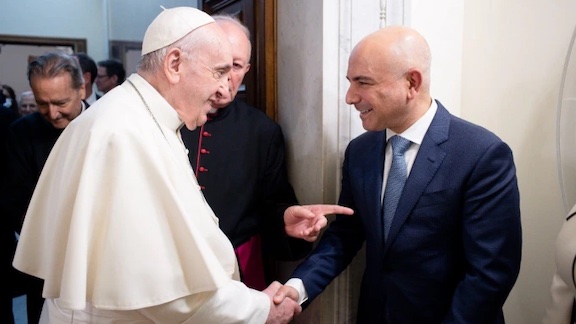 Dr. Eric Esrailian with Pope Francis during the Oct. 25 ceremony awarding him the Benemerenti Medal

Dr. Eric Esrailian, the award-winning producer, philanthropist and physician became the first Armenian to receive the Benemerenti Award from the Pope for his efforts to raise awareness about the Armenian Genocide.

Pope Francis bestowed the medal to Esrailian during a ceremony at the Vatican last month. The recognition was established in 1831 by Pope Gregory XVI.

Esrailian is widely known for his global philanthropic efforts and his work towards social justice, particularly in the Armenian community. He has focused many of his efforts toward securing recognition of the Armenian genocide by the U.S. Congress, and the Armenian National Committee of America has recognized his influence on that milestone. On April 24, 2021, on the 106th commemoration of the Armenian genocide, Joe Biden added the Executive Branch’s recognition as President. President Armen Sarkissian thanked Eric Esrailian, Kim Kardashian and Cher for their efforts.

Dr. Esrailian has been known to work for the betterment of a more inclusive, diverse, and empowered Los Angeles community with his efforts to bring educational resources to the forefront. One such venture includes his involvement while on the Board of Directors of LA 2024. With combined efforts from the Board, they were able to make Los Angeles the host city for the 2028 Olympic and Paralympic games. Esrailian has also been involved in establishing additional programs with UCLA, such as the Leaders of Tomorrow series and a medical school scholarship program[22] which focuses on teaching leadership skills to UCLA students, trainees, and stakeholders via panels featuring influential and successful leaders in the Los Angeles community. In addition, Dr. Esrailian worked with the Kardashian family to launch the UCLA Robert G. Kardashian Center for Esophageal Health, and the Kardashian family has been very supportive of The Promise Armenian Institute at UCLA, efforts toward Armenian Genocide awareness, and the use of the film “The Promise” as a teaching tool for the general public and legislators.

Outside of his work with UCLA, Esrailian is actively involved in philanthropic efforts connecting health, human rights, education, and the arts around the world. In 2017, UCLA designated Dr. Esrailian as a UCLA Optimist — placing him among notable alumni and faculty dedicated to solving the world’s problems. Esrailian has also launched a leadership speaker series called ‘Leaders of Tomorrow’ at UCLA, which emphasizes essential leadership skills through his experiences and those of some of his friends who are the most influential and successful leaders in the Los Angeles community. In October 2020, Dr. Esrailian led a powerful conversation on ‘Grit: Why It Matters’, featuring inspirational leaders such as Kareem Abdul-Jabbar, Brad Gilbert and various deans from the UCLA campus. In 2021, he discussed the topic ‘Doing The Right Thing’ with Amal Clooney.

Esrailian spearheaded the effort to establish The Promise Institute for Human Rights at UCLA School of Law. The Institute is the hub for all human rights scholarship and advocacy in the university and is supported by proceeds from the feature film Esrailian produced in 2016, The Promise, which was set during the Armenian Genocide. Globally recognized celebrities, some of whom are of Armenian descent, supported and promoted the film, including Cher, George Clooney, Leonardo DiCaprio, Barbra Streisand, Don Cheadle, and Andre Agassi.

Under Esrailian’s direction, UCLA also unveiled The Promise Armenian Institute at UCLA in 2019, which was created with a $20 million gift from the estate of philanthropist and entrepreneur late Kirk Kerkorian, who was a close friend of Esrailian. Members from this institute and UCLA Health, led by Dr. Esrailian, have formed a dedicated interdisciplinary team whose mission is to provide both immediate medical disaster relief and long-term humanitarian aid and infrastructure support to assist in the stabilization of the healthcare capacity in Armenia during and after war. Esrailian produced the documentary film Francesco about Pope Francis for Discovery+. Pope Francis had previously visited the Armenian genocide memorial in Yerevan and urged the world to never forget the Ottoman-era slaughter of some 1.5 million Armenians which he termed a genocide.

Amid the reemerging of violence in Artsakh in 2020, Esrailian organized a PSA with the help of the singer and Armenian activist Cher, which called for the U.S. to cut off aid and weapon sales to Azerbaijan and impose sanctions. Esrailian also regularly drafted statements for his close friends and some of Hollywood’s most globally recognized talent who are of Armenian descent, to call on the U.S. for more support to Yerevan, the capital of Armenia. Dr. Esrailian has been credited on multiple other productions dedicated to educating the public on the Armenian genocide and important developments in Armenia such as Intent to Destroy: Death, Denial & Depiction and I Am Not Alone.

In addition to playing an integral role in driving philanthropic projects for UCLA, he is involved with various charitable and community organizations, and is on several nonprofit boards. Among others, he joined the Board of Directors of the Hammer Museum in 2012, which is an art museum and cultural center in Los Angeles known for its artist-centric and progressive array of exhibitions and public programs. Esrailian is also on the Board of Directors of the X Prize Foundation which is a non-profit organization that designs and manages public competitions intended to encourage technological development that could benefit mankind. Esrailian is on the central board of the Armenian General Benevolent Union (AGBU) which is the world’s largest non-profit organization devoted to upholding the Armenian heritage through educational, cultural, and humanitarian programs across the globe. Furthermore, Esrailian is also on the Motion Picture & Television Fund (MPTF) Board of Governors. Esrailian, Sean Parker, and Casey Wasserman, all very well-known innovative and entrepreneurial philanthropists, spoke with UCLA’s campus magazine for UCLA Health about the impact of philanthropy on the future of medicine and science, their passion for giving, and commitment to making a difference.

Taking Care of Casualties of War and Armenian Soldiers: A Remarkable Success Story